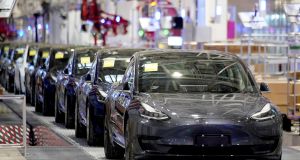 Tesla’s potential to become a key battery supplier for electric vehicles has prompted a bearish analyst on the carmaker to nearly double his bull case for the shares.

Morgan Stanley’s Adam Jonas increased his most optimistic projection for Tesla to $1,200 a share from $650.

That is about 50 per cent above the US company’s $800.03 closing price on Friday, and would give Tesla a market value of $220 billion. Jonas raised his base case target to $500 a share from $360, but reiterated his underweight recommendation.

The new bull scenario is based on an “aggressive assumption” that Tesla could win 30 per cent of the global electric vehicle market, Jonas wrote in a report to clients.

This would include 4 million car deliveries by 2030 plus the potential for Tesla to supply powertrains, including batteries and electric motors, to other auto manufacturers. In 2019 the company handed over 367,500 vehicles to customers.

Tesla shares have had a wild ride this year. The stock is up 91 per cent in 2020, a jump variously attributed to good results, a short squeeze, the opening of a key new factory in China or an extreme case of investor FOMO – or all of the above.

The surge cooled before the Palo Alto, California-based company undertook a $2 billion share offering on Friday, priced at the steepest discount the carmaker has ever given to its investors.

Analysts either have yet to adjust to the gain or remain highly sceptical. The average share price target among analysts tracked by Bloomberg is $489.47, or 39 per cent below the current level.

Morgan Stanley’s bear case for the stock is now $220. While that’s a 91 per cent improvement from the broker’s most recent worst-price scenario, Jonas is sticking to his recommendation against buying the stock, saying the risk-reward balance on the manufacturer continues to be “unfavourable.” – Bloomberg