Dermot Desmond’s Daon will know all about us, yet we know nothing of it 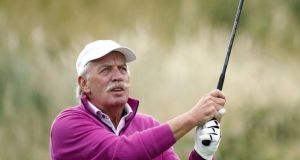 Dermot Desmond: Biometric software firm Daon is his masterpiece and perhaps the most significant company the billionaire has ever built. Photograph: Peter Morrison/Inpho

“The bill? No problem, I’ll get that for you now. I do hope you enjoyed your lunch. Would you like to pay by cash, card or selfie?”

This is where the world is heading, and soon. The age when biometric data such as iris scans, fingerprinting and facial or vein recognition are used for everyday commerce is upon us. And Dermot Desmond is at the heart of it.

His Daon technology company was this month selected by Visa to provide the biometric software for Visa Intelligence ID, a new global platform for card issuers (banks) to adopt space-age technology to provide authentication for consumers.

It is a massive contract. Daon already provides similar software for MasterCard’s Identity Check system. It also works directly with banks globally, such as Atom, the UK’s digital challenger bank, and USAA, a US bank derived from the Automobile Association, and even Union Bank in the Philippines.

No Irish institutions, yet. But if you can’t even trust an Irish bank to keep you on the right tracker mortgage rate, could you really trust it to securely store a scan of your eyeball or the veins beneath your fingerprint?

Daon has already picked up some work from the State, however. It has provided self-service passport kiosks at Dublin Airport and, last month, it was reported that Daon is working with the Government on the controversial public services card.

The Government has denied that it is processing biometric data on citizens. But the die is cast. We all know where the world is going.

Just look at the sort of biometric work that Daon has done for other governments around the globe – airport traveller recognition systems, identity cards, employee biometric identification systems. You’re looking at your future.

Pretty soon, Daon could know everything about many of us. It will know the sound of our voices, the colour of our eyes, our fingerprints, the individual sprawl of our veins.

Yet we know next to nothing about Daon.

Desmond is notoriously secretive about his activities, at least when it comes to the media and general public. Daon, an unlimited company, is headquartered at the International Financial Services Centre but its activities are hidden behind a slew of offshore companies.

For a man who likes to say nothing, Daon is Desmond’s masterpiece. It is also perhaps the most significant company the billionaire has ever built. Given the nature of its activities with our most personal of information, we should be curious.

Almost 11 years ago, I interviewed its chief executive, a polite American named Tom Grissen who runs it from its operational base in Virginia. He flew to Dublin just before Christmas 2006, and we met in Desmond’s oak-panelled office in the IFSC. It is almost inconceivable to think of that happening now.

Then, Grissen explained to me precisely what Daon does: “Our product is the glue that holds an identity management system together. When a fingerprint or iris is scanned, that information is handed to us. We check it against various criminal databases and government watch lists, make sure the person is who they say they are and manage the system overall.”

Two years prior to that, Desmond himself gave what was, as far as I am aware, his last interview with an Irish media outlet: Gabi Thesing spoke to him for Business & Finance, which had given him an award.

This is what he said about Daon: “The story is a simple one . . . I was selling my shares in Baltimore [Technologies, an internet security firm] . . . Everyone told me it was a major mistake, so I thought: what is the biggest threat to Baltimore? The threat is if you can protect your own identity using biometrics.”

He continued: “The year was 2000. I got McKinsey to look at it and they thought it was the way forward. Then 9/11 showed that the world can only be protected by biometrics . . . Daon is very exciting, I have put a lot of money into it.”

That is pretty much all he has ever told the world about Daon.

There is little to be learned from the unlimited Irish company’s public documents. Its constitution says Daon exists to “build and operate a global biometric database which provides verification and non-repudiation for commercial entities around the globe”.

There are no accounts. The file shows that 99 per cent of Daon is owned by a company registered to a post office box in the tax and secrecy haven of the Cayman Islands. The Cayman entity’s skeletal public file shows Daon International was registered in 2002 and is administered by accounting firm Rawlinson & Hunter.

A handful of related Irish companies, IdentityX and PrivilegedX, are owned by companies registered in the tax haven of Jersey.

Its US unit, Daon Inc, filed documents this week in Virginia. But all those confirm is that Desmond still sits on the board alongside Grissen, a couple of Virginian lawyers and Tom Ridge, the first US secretary for homeland security after 9/11.

There are no other publicly available documents. Daon has a website, of course, but that is about as independent as the website of any other corporate entity.

Apart from a tiny unit in the UK, we have no financial statements for Daon group. No inkling of its debt levels, nothing upon which to base an assessment of its stability or its performance, or the likelihood of it remaining in existence deep into the future as the custodian of so many fingerprints, eyeballs and vein maps.

That level of accountability is just the way Desmond likes it. He said as much to Thesing. The rest of us, however, should be less satisfied. If Daon is going to know everything about many of us, shouldn’t we know more about it?

Here’s looking at you, Stella

And so the old Stella Theatre, which is now a high-end cinema and cocktail bar in Dublin’s Rathmines owned by Paddy McKillen’s Press Up Entertainment group, opens its doors again to the public next Tuesday.

Tickets go on sale today for its first public screening, Casablanca, which was chosen by a vote on its Facebook page. Not very scary for Halloween, is it?

Scarier, probably, is the restoration bill for the once derelict premises, which McKillen and his business partner picked up two years ago for something close to €2 million. Good luck to them.

Heading into the last boom, at the turn of the millennium, Dublin’s bar scene was dominated by the so-called Pub Barons. Charlie Chawke, the O’Dwyer brothers, Louis Fitzgerald, the late Hugh O’Regan, Jay Bourke . . . there were several evenly-matched competitors.

Even those of the old barons who dodged insolvency and remain in business, such as Fitzgerald and Chawke, have seen their influence greatly diminished by the fallout from the last crash.

Now, there are many new and growing pub groups, such as the one assembled by Trevor O’Shea’s group or the Loyola group. But there is only one real baron, and that is Press Up. How long until McKillen and Ryan make a fantastically lucrative exit?

Things are definitely getting boomer, although it appears Denis O’Brien’s Quinta do Lago Portuguese golf resort has high hopes for the UK as well as for Ireland.

In Monday’s Daily Telegraph, the resort took out a two-page, lavish advertorial to push its new “multisport campus”, which ordinarily would set you back a few bob.

The resort appears to already have a commercial relationship with the paper, however, as the host of the Telegraph Vitality Junior Golf Championship.

It is just as well Independent News & Media no longer publishes a British newspaper. That was axed as O’Brien was coming over the hill at Tony O’Reilly.

If it was still in the UK, INM would likely be less than impressed to find a company linked to its main shareholder advertising so lavishly in a rival.

1 My aunt never told us that Gran passed away with no will
2 Green Party TD queries ‘usefulness’ of another appeal in €13bn Apple tax case
3 If it’s safe to do so, could this be the time to spend for Ireland?
4 Brussels plans attack on low-tax member states
5 Government to push through €2bn credit guarantee scheme next week
Real news has value SUBSCRIBE