Facebook made friends with Ireland for good reason: it makes a fortune here 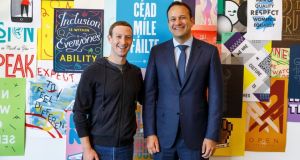 Facebook is running short of friends globally. Mark Zuckerberg was eviscerated after he “sent his cat” (or didn’t show up, if you’re not Belgian) to a “fake news” international committee hearing this week.

But as one of the most significant employers in Dublin, our policymakers will always like Facebook, a lot.

It is a troublesome friend for the State, getting our leaders into bother with their international peers over everything from tax to data regulation.

But even that uncontrollable pal who keeps landing you in the soup will be forgiven by the hard-headed, once they’re happy to spread the love from their hefty wallet. It is short-term thinking, but welcome to realpolitik.

Accounts filed this week for Facebook Ireland show that its revenues rose last year by 48 per cent to €18.7 billion. This proves it made friends with Ireland for good reason: it makes a fortune from its operation here. But just look at how much it pays its directly-employed local staff. They are minted.

That is just the average.

The average Irish full-time salary is just €46,000  . . . less than a third of the twine paid out by Zuckerberg’s mob

Send the cat? Send the bloody limo, more like. And make it snappy.

It is a different matter for those indirectly employed at Facebook on far lower salaries through contractors, which must account for the bulk of its near 4,000 workers in Ireland if the numbers reported in its accounts are anything to go by.

But the lucky duckers who work directly for the company make ordinary Irish workers seem impoverished by comparison, especially its stratospherically-remunerated software engineers who are paid multiples of the average.

The tech nerds really are reaping monetary revenge now on the numbskulls who gave them wedgies all those years ago at school. The average Irish full-time salary is just €46,000, according to data from the State, less than a third of the twine paid out by Zuckerberg’s mob.

Even the ESB, traditionally the land of milk and honey in the world of average Irish salaries, is left in the shade. Its 7,790 staff last year were paid an average of only €77,000, with another €7,000 or so lobbed into their pensions. The average Facebook worker wouldn’t get out of his or her buckwheat mattress-adorned bed for that sort of cash.

Earlier this month, Facebook Ireland finally confirmed that it will shift all its workers to what is currently AIB’s campus in Ballsbridge in affluent Dublin 4, where it will have space to expand the total employed up to 7,000 if it wants.

When you think about it, Facebook isn’t just replacing AIB physically. It is also replacing it symbolically at the core of the Irish economy.

Before it helped bring us all to the edge of penury with its property-lending antics a decade ago, the bank was top of the pile in our old economy. Now, the digital doyen of our new economy gets to push AIB out of the way, moving into the bank’s home in the heart of establishment Dublin.

And if you need further proof of Facebook’s usurping of the likes of AIB as an attractive place to work, look again at those average salaries. Back when the old economy reigned, many young people coveted a “job in the bank”, a job for life.

Few companies can afford to pay their workers the rates on offer at the social media giant. So it is no wonder that the rocketing cost of living in Dublin is creating pressure points all across those parts of the economy that don’t face Silicon Valley.

Executive search firm Ardlinn, owned by CPL Resources, which coincidentally provides contract staff to Facebook, said this week the cost of living in Dublin is driving even highly-paid managers in many industries out of the city.

Ardlinn cited recent research which suggested that professionals now need to be earning about €165,000 to buy an average-priced house in, say, Blackrock in south Dublin, a reasonable neighbourhood for Irish manager-types to aspire to live. That’s beyond even the average Facebooker, who would need to couple up before he or she could splash out on buying a pad.

Ardlinn estimates that, if upwardly-mobile managers are already fleeing Dublin due to living costs, within five years this could lead to a shortage of people ready to be moulded into top-level executive positions, or “C-suite leaders” if you prefer dystopian corporate lingo.

“The problem . . . is middle management and talented professionals one or two rungs below C-level are being priced out of the market and are increasingly considering options elsewhere,” said Ardlinn’s Áine Brolly, who used to work in California for Invest NI.

“Having seen this occur first hand in San Francisco’s Silicon Valley, where costs forced investors and talent to relocate, I am concerned Dublin could suffer a similar fate,” she said.

When policymakers glibly assert that they are turning Dublin into the Silicon Valley of Europe, surely this isn’t what they had in mind. We’ll all end up looking for Facebook-style salaries just to get by.

How interesting to learn this week that prestigious Duke University has emerged as one of the largest shareholders in Independent News & Media (INM), after Denis O’Brien and Dermot Desmond. Duke, located in North Carolina, was named in an INM filing as being associated with a 4.36 per cent stake in the publisher.

You may wonder why a fund making investments for one of the best business schools on the planet chose to put some of its cash into an Irish newspaper group beset with challenges. INM is profitable and diverse, but the industry as a whole is on the rack.

INM is also, of course, facing a number of bespoke corporate governance challenges, not least the ongoing investigation by High Court inspectors into an alleged data leak that included journalists’ emails.

In any event, the investment is only small beer for Duke, whose famous alumni include Tim Cook of Apple and Melinda Gates. Its INM stake was valued this week at just over €4.1 million.

The university has scant links to Ireland, and it certainly appears to have none to INM’s other major shareholders. O’Brien’s US university links are to Boston College, where he did his MBA, while Desmond graduated from the university of life, before receiving an honorary doctorate from UCD for his contribution to business.

Apart from its INM stake, one of Duke’s few tangible links to Ireland is DukeEngage Dublin, which sends eight university students to Ireland each year for summer placements in the field of migrant and refugee issues. Occasionally, they contribute to the Dublin migrant issues paper, Metro Éireann. So perhaps Duke’s INM punt isn’t its first foray into the Irish newspaper sector after all.

DukeEngage Dublin is run in conjunction with Duke’s Kenan Institute for Ethics, which was set up by a North Carolina philanthropist, Frank Hawkins Kenan, who was worried about a lack of ethical standards in business and public life. On that topic, the university will find plenty upon which to chew on our misty isle.