Caveat: a delay, a decision, a text to Leo: Apple gets the go-ahead 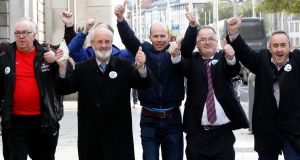 Apple for Athenry: A group supporting the planned Apple data centre in Galway celebrate after the judicial review rejected both challenges to the project. Photograph: Courtpix

More than two and a half years after Apple first announced it would invest €850 million in a data centre in Athenry, it all came down to a judicial review of the planning application due for decision at 11am in court 13 of the High Court.

The people of Athenry had waited this long, they could wait a bit more: the judge put the decision off until 11.15am so he could first deal with other cases. A phalanx of lawyers, and seemingly half of the town of Athenry, filed out into the corridor for some breathing space before the judgment was delivered.

Sean Canney, the Government-supporting Independent TD for East Galway, was among the local supporters of the Apple project, which was held up by just two local objectors and one not-so-local owner of a rival site for the project in Wicklow.

Canney had a firm grip of his mobile phone outside the courtroom. He said he had bumped into the Taoiseach, Leo Varadkar, earlier in the morning at a conference in Croke Park. Varadkar had asked Canney to text him immediately with the result of the Apple case, once he knew.

“I hope it’s good news I have to text him,” said Canney.

The TD said it was his firm understanding that Amazon, which has previously indicated it wants to invest €1 billion in an Irish data centre, is “watching, waiting and will review the future” of its proposed investment based upon the impending result of the Apple/Athenry case.

“Leo told me himself that data centres need to be taken in under the [fast track] strategic infrastructure planning laws,” said Canney.

The corridor outside and courtroom benches were packed with the various local supporters of the Apple project. Paul Keane, who set up the Athenry For Apple Facebook page, and who organised a march in the town last weekend, strolled in just before 11am looking quite nervous.

“I have done almost nothing but work on the campaign recently. I did 72 hours on it last week. I might get a chance now to go back to my day job,” he said.

As the case wound its way through the courts over the last year, Keane became something of a go-to figure for national and international media that had pumped out acres of bemused copy about how an €850 million investment could be held up for more than a year by just three people.

“In the last few days, I’ve had journalists on to me from the US, from Israel, from France. People all over the world are watching this,” he said.

Keane’s Facebook page also welled up with pre-judgment messages of support. One contributor even posted a poem in support of the campaign: The New Rising Will Not Be Available Later in RTÉ iPlayer. It isn’t the most concise title, and the poem didn’t appear to mention Athenry or Apple’s proposed data centre at all. But hey...

Inside the courtroom, a second group of about a dozen local supporters sat on the back bench sporting big Apple stickers on their coats, lest anybody be unsure of their allegiances on this matter.

This group calls itself Athenry4Apple, which clearly runs the risk of being confused with Keane’s separate, but similarly-named, Facebook group. But never mind, they’re all on the same side.

Athenry4Apple is sometimes known as Future Looking Athenry Group, or Flag for short. Noel Doherty, a retired nurse and the group’s spokesman, was also in demand amongst international media in previous days.

“I spoke to the French last night, then I was up at 6am to get the train to Dublin this morning for this judgment.”

“I think this is my seventh,” he said.

It was now 11.10am. Almost showtime. The court filled up again, as the Athenry crowd in the corridor streamed back through the doors. With all the casuals and the newbies standing down the back, it felt like midnight mass.

Allan Daly, one of the objectors who had held up the project, sat alone on a chair, making occasional notes. He looked serious, worried, pensive.

Nobody spoke to him until Sinéad Fitzpatrick, a local Athenry solicitor who took the case alongside him, moved through the crowd just before the judgment was due. The two exchanged a few brief words, before Fitzpatrick stood to wait for the judgment, clutching her yellow notepad. Daly remained sitting.

The judgment was promptly delivered, the applications were refused, the objectors had lost, and the matter was adjourned until next Monday to see if the objectors plan to launch an appeal.

Some of the Athenry supporters looked confused as to the outcome. What just happened, asked a confused looking Keane? He turned to former attorney general Michael McDowell, who was already making his way out of court.

“The objections were knocked back and the project has the go ahead,” replied McDowell, who was in court to represent the objectors.

Keane looked elated. The Athenry crowd started whispering the good news amongst themselves as the crowd left court, but there was no whooping and hollering. It was a muted, almost anti-climatic ending.

“We have to respect the court,” said Doherty, before making a hand gesture, mimicking the drinking of a pint,to another man across the room.

Canney whipped out his mobile phone to text the Taoiseach: “Just got confirmation... The decision was to refuse the applications.... We’ll find out Monday whether there are appeals...”

Varadkar responded that it was “great news” and mused about whether there would be appeals.

Outside the building, the Athenry4Apple group was cheering, posing for photographs and giving radio interviews.

The sun streamed through the leaves of the trees beside the Liffey. And it shone too, presumably, on Athenry.

There was a strong desire to end the boardroom row at Independent News & Media in recent weeks, as talks continued between representatives of chief executive Robert Pitt and chairman Leslie Buckley, who fell out over the price tag for a proposed bid for Newstalk.

It has now been announced that Pitt is to leave the business... on Friday the 13th, unlucky for some. But in the context of INM, unlucky for whom, exactly?

The row, which rumbled on for almost 18 months, was one of the most bitter and extraordinary boardroom spats at an Irish listed company, and a gift to Irish business journalism.

Pitt dug in at INM, and put himself in a fairly bullet proof position while the Office of the Director of Corporate Enforcement investigates the circumstances surrounding his whistleblower complaint about Buckley.

Denis O’Brien, whom Buckley represents on INM’s board, is the largest shareholder at INM. He would not have wanted to see his chairman walking away. Pitt surprised everybody by how long he managed to remain in situ.

But will his departure on Friday mean we are to be denied a public denouement to the row?

You can bet your bottom euro that the deal came gift-wrapped in gagging clauses and non-disclosure agreements.

What do Buckley and Pitt really think of each other? We will probably never know.

Rivada, meanwhile, is battling hard to win business from US states that may opt out of the US’s new federal communications network for first responders, FirstNet, which is to be built by rival company AT&T.

Rivada will testify next Thursday at a public hearing over FirstNet in Pennsylvania, although there is no word on whether Ganley will make an appearance.

The company also has designs on stepping up to the mark in Vermont and New Hampshire, amongst other states.