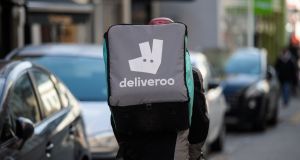 Like the taxi app Uber and others before it, Deliveroo is engaged in public debates across Europe about whether its riders are genuinely self-employed. Photograph: Jack Taylor/Getty Images

Last Friday evening, I sat with a colleague in traffic at one of the busiest inner city junctions in the vicinity of The Irish Times. As we waited, two cyclists appeared from behind us and broke the red light. Both were wearing the branded backpacks of Deliveroo, the food delivery app that, along with its competitors, is revolutionising the restaurant industry.

The first rider got through easily. He may have been breaking traffic laws, but under the laws of common sense, he wasn’t in much danger of breaking anything else. He found a sizeable gap in the traffic and traversed it safely and in plenty of time.

The second rider, however, was on a kamikaze mission. Presumably, he looked up and saw the first rider getting through without incident, and went for it in his colleague’s slipstream. He didn’t check the traffic coming off the south bank of the river Liffey to his left, and he shot through the junction without looking.

Watching him, my colleague and I gasped as he rode in front of a speeding car. It is no exaggeration to say that the second Deliveroo rider was inches from serious injury or death. It was a suicidal move to pull in the city centre at night. Yet he didn’t even look back. He kept pedalling towards the docklands area that is home to the biggest tech companies in the world.

What could motivate a food delivery rider to take such a stupid risk with his own life? After all, he was just delivering dead meat and vegetables. There’s no point ending up dead over it yourself.

Perhaps he is just a bad cyclist – the city is full of them, just as there is no shortage of bad car drivers. You cannot legislate for people who are prepared to pull crazy stunts, and they are hardly lonely outliers: every Irish person, no matter what mode of transport they choose, knows the running joke that, here, red lights mean stop, green means go, and amber means go faster. The rule is you can break the rules.

But what if our Deliveroo Daredevil was motivated by something else? Money, perhaps, or even worry. He wasn’t out on a night cycle to take in the river breeze. He was in a major hurry, so he was obviously either on his way to pick up a delivery from a restaurant, or on his way to a customer to drop it off.

The more drops he makes, the more he earns. The quicker he makes them, the less likely he is to be delisted by Deliveroo for recording persistent slow delivery times. The company clearly tells its self-employed riders to obey all relevant traffic laws and ride safely. But a high-pressure, ride-faster-and-earn-more culture could still contribute towards bad decision making by riders.

The British company is among the best known of the platform-working “gig economy” apps that are helping to upend the traditional notions of work and employment. They use technology to connect customers with a need (in this instance, the need to get a chicken madras from the local Indian takeaway) to “gigging” self-employed workers who can fulfil it (a cyclist with a thermopack and a willingness to ride across the city to bring you dinner).

Deliveroo was in the news this week on both sides of the Irish Sea. Here, Dublin City Council wrote to Deliveroo, and also to its rival JustEat, to complain that some riders are supposedly “reckless” on the roads. Hell yeah – re-read the paragraphs above for exhibit A. Meanwhile, in London, the high court upheld an arbitration committee finding that a trade union cannot claim collective bargaining rights for Deliveroo riders.

In a major win for the company and its flexible business model, which is partly built upon eschewing the costs and burdens of traditional employment, the committee found that Deliveroo riders cannot be said to be “workers” because they can theoretically sub-contract individual deliveries to other people.

It doesn’t make much sense that a Deliveroo rider could go through stringent hygiene and safety training, and enter a contract, only for the rider to be allowed offload business to a random punter of whom Deliveroo knows nothing. But even if this theoretical ability is contrived or unlikely, the committee found, it still exists. Therefore, the Deliveroo riders cannot be said to be “workers” or employees, but rather they are individual contractors in a business relationship with it.

Like the taxi app Uber and others before it, Deliveroo is engaged in public debates across Europe about whether its riders are genuinely self-employed. Or are they simply ordinary workers coerced beyond the protective boundaries of traditional employment laws, modern day chimney sweeps for a digital age?

Employment law puts all of us into one of two buckets: employees or the self-employed. The gig economy, with its low-paid army of the “self-employed” with no holiday or sick pay or other benefits, is testing that old dichotomy.

The issue is still in its infancy. UberEats launched in Ireland last month. Deliveroo already has close to 1,000 riders here. JustEat, which used to rely on riders employed by restaurants, has now started to provide its own. The food industry is only the start of it, too – online shopping is next. Irish start-up WeBringg says it can deliver anything from a signed-up retailer to a customer in 90 minutes, using a fleet of self-employed delivery drivers.

Some people are employees. Some are self-employed. But others are, clearly, something in between, and in need of better protection. The law needs to catch up quickly, to find a third way.

In the meantime, riders, red means stop. For all our sakes.

– The giant US institution, Bank of America Merrill Lynch (BAML), completed the formation of its new European headquarters in Dublin over the weekend, when it received regulatory approval to merge its London and Irish units. The Brexit-proofing move means 100 staff are switching to Dublin, bringing the total employed to 800.

BAML had another reason to celebrate this week, however. Bank of America has been operating in Ireland for 50 years.

The bank held a celebratory dinner earlier in the week at the National Gallery in Dublin, attended by, naturally, about 50 guests. These included local luminaries such as Martin Shanahan, the chief executive of IDA Ireland; Mark Redmond, chief executive of the American Chamber of Commerce in Ireland; Terence O’Rourke, chairman of Enterprise Ireland, former managing partner of KPMG and a director of The Irish Times; John Fitzpatrick, chief executive of Fitzpatrick hotel group and chairman of the Ireland Funds America; and Neil Murray, the Irish-sounding Welshman who runs the Abbey Theatre.

– Buried amongst the tax defaulters listed by Revenue this week was a Donegal company, which made a VAT and corporation tax settlement of €146,000. The Border counties, rightly or wrongly, are linked with a certain driving stereotype: boy racers. The Letterkenny tax defaulter was listed by Revenue as a “driving instructor”. The name of the driving instructor’s company, however, raised a few smiles in Dublin given the local stereotype: Shaun Gallagher Motorsport Limited.