Chief executive steps down from telco after securing broadband trophy 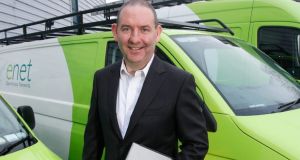 Conal Henry: to the irritation of rivals, he sought and won a renewal of the Government contract to run the State’s Metropolitan Area Networks

By any measure Enet boss Conal Henry’s performance over the last 12 months has been stellar. First he secured a deal that saw 78 per cent of the telco acquired by the State-backed Irish Infrastructure Fund (IIF).

The transaction valued the company at between €150 million and €200 million, an inflated price in the eyes of several industry observers, but it allowed initial investors a pretty tasty exit package.

Then, much to the irritation of rivals, Henry sought and won a renewal of the lucrative Government contract to run the State’s Metropolitan Area Networks, a series of telecommunications networks built around 94 towns, which is core to Enet’s operation.

If this wasn’t enough, the company now finds itself in pole position to win the Government’s national broadband tender, seeing off the State’s incumbent, Eir, and ESB-Vodafone-backed Siro in the process.

Eir’s exit last month left Enet as the only horse in the race with all that implies for bargaining and haggling over price. Winning a €1 billion contract when you are a company with a turnover of just €50 million is some going.

However, instead of basking in the afterglow of these victories, Henry this week surprised everyone by announcing his resignation. Neither he nor the company provided an explanation and the move remains shrouded in mystery.

Having the chief executive of the last remaining firm in the broadband race exiting on the cusp of victory must have sent shivers down the spine of Minister for Communications Denis Naughten, who has been firefighting controversies to do this the process for months.

Being the garrulous outsider, challenging the incumbents, played to Henry’s strengths and with the company now set for bigger things maybe the owners decided he was past his sell-by date.

But this theory falls down when you consider Enet has still to officially secure the Government’s broadband contract and broker a workable deal.

Henry’s reticence and Enet’s sparse statement suggest something else may have happened.