The banana phone? New mobiles no longer look so smart

Cantillon: Mobile World Congress handsets have little to shout about 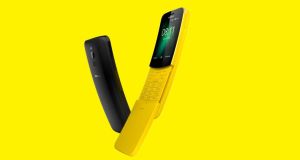 Banana phone: Nokia’s new version of the 8110, the handset used in The Matrix

Has the smartphone peaked? It would be fair to assume that all is well on the souped-up-phone front given the volume of news and devices emerging from Mobile World Congress, in Barcelona. But look more closely and you’ll see signs of fatigue.

Even though everything seems shiny and new, manufacturers seem to be churning out relatively similar devices, with only slight updates – an upgraded camera, or animated emojis of some description. They’re struggling to differentiate themselves in a crowded market.

It’s starting to translate into slowing sales. The most recent report from Gartner showed sales fell for the first time in the last quarter of 2017, declining 5.6 per cent, although they were still up 2.7 per cent over the year. Instead of customers upgrading each year, or even every second year, companies now face the reality that consumers are hanging on to their – rather expensive – phones for longer.

Nokia, meanwhile, is grabbing headlines again by dusting off some long-abandoned models and shoving some modern features under the hood, to tap into the nostalgia for feature phones that aren’t quite. Last year it was the reboot of the 3310 – now with both a camera and the ability to connect to the internet. For its next trick the company, which is now owned by HMD Global, has reintroduced the 8110, the slide-down “banana phone” used in The Matrix. Despite a few tweaks and some extra features, the 8110 still falls far short of modern smartphones.

If such resurrections are what it takes to grab consumers’ attention, perhaps we really have hit peak smartphone.