Intercom to double Dublin base as it adds 350 jobs worldwide 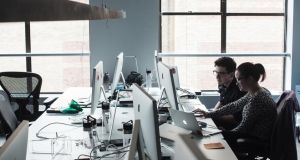 Intercom builds software products in Dublin, San Francisco and London, and over the next 18 months it plans to double its staff in all those locations, to more than 800 employees in total.

Irish-founded technology firm Intercom is to expand, doubling its staff numbers over the next 18 months.

“We have a huge appetite to build a lot more software,” said Des Traynor, chief strategy officer with Intercom.

Intercom builds products in Dublin, San Francisco and London, and over the next 18 months it plans to double its staff in all those locations.

That will bring the total number of staff from the current 464 people to more than 800 in the coming months.

The company allows internet firms to communicate quickly and easily with customers through a number of channels, whether it is on a website or through a mobile app, for marketing, sales and support.

“We’ve gone from four to almost 470 people in six years,” he said. “Our appetite to build product is what has fuelled this.”

In that time, Intercom has raised about $115 million in various funding rounds, with the most recent being $50 million in a series C round in 2016.

Some 25,000 businesses now use Intercom, tracking more than a billion people worldwide.

“We say our mission is to make internet business personal,” said Mr Traynor. “What we mean is we want to move it away from this transactional world where everyone is having different conversations through different silos with a different customer view. It’s not because the business doesn’t care, it’s that the tools don’t allow this empathy or this customer context. That’s what Intercom does.

“We really think that the future of communication for business is more like the past than it is the present. We’re in this weird anomaly where we raced online and we forgot about the customer experience. That’s part of what we’re trying to help catch up with.”

Intercom has the space to expand at its St Stephen’s Green offices – in the old Anglo Irish Bank offices – although Mr Traynor isn’t giving away anything more about future growth plans. He said that for the longer term the company does not know what its plans will be, although it wants to stay in the city centre. He said the commercial property market in Dublin remains a concern, but the company is also keen to create a good work environment and not pack employees into the space available.

As for business plans, the company has made its mark in sales, marketing and support categories, but it wants to move into new areas, he said. “We want to be dominant in all different ways people communicate,” he said. “That’s the long-term goal.”

1 Oxford Covid vaccine trials offer hope for elderly
2 How much state pension will I get next year?
3 Ulster Bank to introduce new card payment controls on app
4 Sustainable investment: How your pension can help tackle climate change
5 Hurrah for the companies giving staff more time off
Real news has value SUBSCRIBE