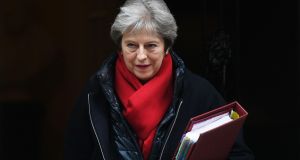 And so we arrive at “managed divergence” also known as “the three baskets approach”. This is London’s post-Brexit trade plan, agreed by Theresa May’s 11-strong Brexit “war cabinet” after an eight-hour meeting at the prime minister’s official country residence Chequers .

For now the approach unites hard Brexiteers such as Boris Johnson and pro-European types like chancellor Philip Hammond. However, analysts see it as a victory for hard Brexiteers.

The avoidance of “regulatory divergence” on the island of Ireland – interpreted by many as keeping Northern Ireland within the customs union – was viewed by the Irish Government as a major breakthrough in the Brexit negotiations in December. This has now been washed away by “three baskets” as silly as that statement sounds. The Government can no longer indulge in the fantasy that it has any certainty about the Border.

And this may explain why its “bulletproof” backstop plan, heralded as peace in our time only a few months ago, is rapidly being downgraded from an article of the final withdrawal agreement to an appending protocol.

London is banking on a pragmatic EU dropping its insistence on the current rules which oblige the UK to pick one of the several Canada-style/Norway-style binary options in favour of a mutually beneficial trade pact with the UK.

This may be acceptable to certain countries – the Nordics and the Netherlands – but it is likely to be resisted by Germany, which believes “managed divergence” is just the UK cherrypicking the bits of the EU it wants to retain.

France is expected to take an even harder line. The latter will influence the European Commission’s upcoming guidelines on a trade framework, to be published next month. Either way this isn’t going to end well.