Are we finally exiting the era of sluggish wage growth? 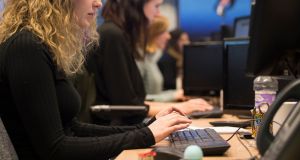 It’s been one of the great conundrums of the post-crash global economy: how full employment in countries like the US and the UK has coincided with slow wage growth. It was a factor in the Brexit vote and the election of Donald Trump. Fine Gael got pilloried at the last general election here for playing up the recovery – largely because workers weren’t feeling it in their pockets.

Normally when economies tend towards full employment, wages begin to rise as employers chase a shrinking pool of labour, but this hasn’t happened. Instead we’ve had a low-wage, jobs-rich recovery.

There are a number of theories put forward to explain the current disconnect between employment and wage growth, but none more cogent than the productivity argument. Between 2010-2014 global productivity growth, a key driver of wage growth, fell to an average of 0.5 per cent compared to 2.4 per cent a decade previously.

This has been linked to digitisation, the gig economy and, in general, the global trend away from industrial-based economic activity to service-based activity which is often characterised by low wages and low levels of productivity.

That said, the latest earnings data for Ireland, published this week by the Central Statistics Office, show average wage growth in the economy accelerating to 2.5 per cent in the final quarter of 2017, the strongest rate of growth recorded since the crash.

This suggests Ireland’s recovery and the interplay between wages and employment may becoming more routine. Why this might be the case is hard to say.

We certainly haven’t had as big an industrial base as other countries and may be less affected by the shift to a more services-based economy. Another possibility is displacement. Although thousands of construction workers were laid off during the crash, a factor that should have acted as an anchor on wages, many emigrated rather waiting to be re-employed elsewhere.

Hence the safety valve of emigration may, in effect, be allowing wage growth track headline trends in employment more closely.

It’s, of course, early days to be plotting, with certainty, where wages are going. The trend should be clearer in the coming months.