Company looking to expand further in China, which accounts for 50% of its revenues 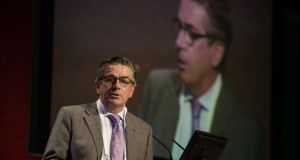 Irish chipmaker DecaWave has announced 100 new jobs over the next three years following the closing of a $30 million (€24.4 million) funding round.

Founded in 2007 by Ciarán Connell and Michael McLaughlin, the Dublin-headquartered company offers ultra-wideband wireless technology via a low-power chip that can identify the specific location of any object indoors to within a few centimetres. the data communication capability of the chip makes it a good fit for Internet of Things (IoT) applications and other low-power wireless network applications.

China accounts for roughly half of DecaWave’s €8 million revenues and the company recently opened a new Chinese headquarters in the southern technology hub of Shenzhen.

DecaWave said it intends to use the new funds to expand in China and also to further develop its second-generation solution to address a demand in the high-volume consumer and automotive markets.

Following the latest investment, Brian Long and Gerry Maguire of Atlantic Bridge and John Flynn of ACT Venture Capital will all join DecaWave’s board, which is chaired by former general manager of Intel Ireland Jim O’Hara.

DecaWave currently employs about 70 employees globally. It said the newly-announced roles will be in the areas of engineering, R&D, sales and marketing and applications, with recruitment already underway.

The company previously raised more than $25 million in funding with early backers including Enterprise Ireland, STMicroelectronics and Kernel Capital.

1 Abtran challenges award of €63m contract by Irish Water to rival company
2 Pilita Clark: When a rude boss keeps you waiting, why not walk out?
3 US threatens retaliation against EU over proposed carbon tax
4 NI house builder apologises to Harry and Meghan over adverts
5 Are there annual limits on inheritances or gifts to a child?
Real news has value SUBSCRIBE