Qualcomm keen to begin due diligence with Broadcom 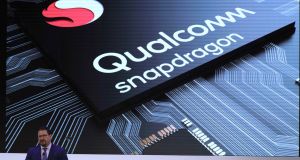 Cristiano Amon, President of Qualcomm, delivers a presentation during the Mobile World Congress in Barcelona: Qualcomm signalled on Monday it was open to a deal with Broadcom and said it would open its books to the Singapore-based group

Qualcomm signalled on Monday it was open to a deal with Broadcom and said it would open its books to the Singapore-based group in an attempt to bring the two closer together on agreeing a price for what would be the largest tech acquisition in history.

Paul Jacobs, the chairman of Qualcomm, said in a letter to Broadcom chief executive Hock Tan that the company would like to sign a non-disclosure agreement and begin due diligence between the two companies. Mr Jacobs also proposed the two companies arrange a meeting “as soon as mutually convenient” to negotiate a price to strike a transaction.

Broadcom had previously offered its US rival much as $146bn, including debt, in a “best and final” bid it hoped would clinch an agreement, a figure that was rebuffed by Qualcomm’s board of directors. Broadcom later cut that price to $142bn after Qualcomm agreed to a $44bn deal to take over NXP Semiconductor.

On Monday, Mr Jacobs said a meeting between the two companies held on Friday had led to “further progress” on a deal that would likely face significant regulatory hurdles. He wrote that with other assurances made by Broadcom, Qualcomm had asked the Singapore-based group to agree to any regulatory remedies demanded by authorities.

The US company also sought an increase in the reverse termination fee to 9 per cent of the transaction’s enterprise value, payable by Broadcom if a deal were to be blocked by regulators. At $142bn, that would represent roughly $13bn.

Broadcom had previously proposed a breakage fee of $8bn.

“The path forward...provides the appropriate level of protection to Qualcomm stockholders commensurate with the high degree of regulatory risk associated with this potential transaction,” Mr Jacobs wrote. “If acceptable to Broadcom, this would resolve all issues between the two companies other than price.”

Qualcomm shares rose nearly 3 per cent in pre-market trading to $65.