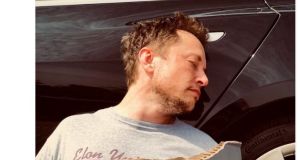 Elon Musk posted a picture of himself pretending to be passed out while holding a sign that read “Bankwupt!”. “Elon was found passed out against a Tesla Model 3, surrounded by ‘Teslaquilla’ bottles, the tracks of dried tears still visible on his cheeks,” read the accompanying tweet.

US stocks tumbled yesterday, weighed down by Tesla and Amazon, while the dollar slid as China raised tariffs on US products in an escalating spat between the world’s two biggest economies.

The Nasdaq Composite skidded closer to correction territory and gave up its gains for the year as the technology-heavy index endured another day of fierce selling.

Tesla led the decline among the big technology stocks, slumping 5.1 per cent as investors continue to digest the spate of negative headlines around the electric car company.

Investors also took a dim view of chief executive Elon Musk’s attempt to make light of Tesla’s woes by joking on Twitter over the weekend that his company had “gone completely and totally bankrupt”.

Elon was found passed out against a Tesla Model 3, surrounded by "Teslaquilla" bottles, the tracks of dried tears still visible on his cheeks.

This is not a forward-looking statement, because, obviously, what's the point?

“Despite intense efforts to raise money, including a last-ditch mass sale of Easter Eggs, we are sad to report that Tesla has gone completely and totally bankrupt. So bankrupt, you can’t believe it,” he wrote in a series of tweets on April Fools’ Day.

He later posted a picture of himself pretending to be passed out while holding a sign that read “Bankwupt!”.

Intel shares closed down 6.1 per cent after Bloomberg reported Apple is planning to use its own chips in Mac computers beginning in 2020.

“There is a risk-off mentality and it has really kicked in in the last hour and a half,” said Andrew Brenner, a partner at National Alliance Securities, a brokerage.

“The president’s continued attack against one of the best performing stocks – Amazon – is definitely causing nervousness.”

The US’s brewing trade war with China also anchored markets. China bumped tariffs by up to 25 per cent on 128 US products, from frozen pork and wine to certain fruits and nuts, in response to US duties on imports of aluminium and steel.

The Trump administration will unveil by Friday a list of advanced technology Chinese imports targeted for US tariffs to punish Beijing over technology transfer policies.