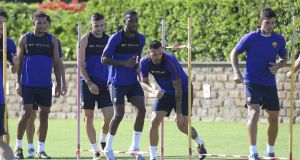 Irish sports tech company Statsports is expecting to significantly increase staff numbers and may seek outside funding as it looks to accelerate growth after scoring a £1 billion (€1.14 billion) deal with the US Soccer Federation.

The five-year deal will see millions of American players using its monitoring devices to aid performance on the pitch.

The partnership is expected to result in the world’s largest player data-monitoring programme and it is believed to be the biggest contract ever to be signed in the elite sports wearables market.

“This is a great opportunity both for us as a company and also for the federation as soccer is growing at a phenomenal rate in the US,” Newry-based Statsports co-founder Sean O’Connor told The Irish Times.

The contract is seen by the federation, which is the official governing body of soccer in the US, as the first step towards giving footballers across all levels access to performance technology used by top professionals and teams around the world.

The agreement also sees Statsports rolling out the first version of its Apex Athlete Series, a consumer-focused product that will eventually go on sale generally.

Statsports, which was founded by Alan Clarke and Sean O’Connor in 2007, already supplies its technology to a number of leading European soccer clubs including Arsenal, Manchester City, Manchester United, Barcelona and Juventus.

In addition, the company’s monitoring devices are used by the Irish Rugby Football Federation (IRFU) and all four Irish rugby provinces, as well as teams playing across GAA, American football, hockey and basketball.

The Apex device is worn in a vest and positioned between the shoulder blades during training and matches. It captures thousands of datapoints per second in real-time on everything from speed and distance run, to whether an athlete is favouring their left or right side so much that their running efficency goes out of sync.

The partnership with the US Soccer Federation is already under way with Statsports’s Apex Team Series monitoring devices being rolled out to the men and women’s national teams. Over the coming years, the systems will also be deployed to the paralympic, futsal and beach soccer national teams, as well as to the national women’s soccer league, youth national teams, and development academy clubs.

Mr O’Connor, Statsports’s chief operating officer, said the company expected four million of registered players in the US to be wearing its devices by 2022. He added that the programme could revolutionise the way sportspeople train, recover and perform in the US.

“What we are trying to achieve is to make players available for more matchplay by ensuring they are healthier, stronger and fitter so they can do what they do even better. It will also enable US Soccer to more easily identify up and coming talent,” he said.

Statsports employs about 50 people but the self-financed company is expecting to take on additional staff on the back of the deal.

“We’re ultimately looking to grow to up to about 300 people,” said Mr O’Connor.

While the company does not disclose turnover, he said STATSports is expecting to double revenues this year and has grown year-on-year since it was founded.

Established by Mr O’Connor, who has a background in sports science, and Alan Clarke, a former musician and engineer, the company has been self-financed to date.

“We’ve been growing significantly each year and have been constantly ploughing money back into the business to develop it further. We’ve funded ourselves so far but are probably at the point where we will look at obtaining outside funding so that we can rapidly accelerate growth,” he said.