Intercom’s valuation exceeds €1.2 billion as it plans to invest in product development 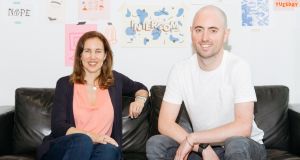 Tech company Intercom has raised $125 million in a move that elevates the Irish-founded business to unicorn status.

The funding round was led venture capital firm Kleiner Perkins Caufield and Byers, where internet trends expert by Mary Meeker is a key player. Also on board was Google Ventures and existing investors. As part of the funding, Ms Meeker will join Intercom’s board.

It brings Intercom’s valuation to $1.275 billion – comfortably above the $1 billion level that confers Unicorn status on start-up companies – and brings to $241 million the total funding raised to date by the business.

The company, founded by Eoghan McCabe, Des Traynor, Ciarán Lee and David Barrett in 2011, allows internet firms to communicate quickly and easily with customers for marketing, sales and support. It operates through a number of channels – via website or mobile app,

“It’s a big valuation,” Mr McCabe said, “pretty incredible to see that in just under seven years, we’ve come this far. And we still have most of the original ideas we worked on yet to build.

The new funding will go mainly towards shipping new product and maturing the product that Intercom already offers, with a focus on developing products for larger businesses.

“Over time as little companies grow, they ask for more sophisticated features. We’ve given those features and so we’ve started to move up market, started to focus on ever larger companies that have more specific and complex requirements,” he said.

The company will also invest in its messenger product, which it launched in 2011, the same year that Facebook Messenger, iMessage, Whatsapp and Snapchat launched.

“Everyone was working on the same thing - a new substantially more personal, engaging, fluid friendly way to communicate digitally. While all these companies focused on building technology for consumers, we built it for businesses,” Mr McCabe said.

“As time went on, we saw that businesses using this messaging medium instead of old school email were just substantially more successful at connecting with customers, engaging them, getting their attention, helping them out and ultimately having them do the business would want - signing up for their service, or buying things.”

Statistics provided by the company claim that of the clients that use Intercom messenger on their site to talk to customers, they see an 82 per cent lift in conversion rates on their website.

Intercom handles around 500 million messages through its service each month. It expects that figure to increase further, particularly with future generations of consumers, who do not have email addresses and instead have grown up with messenger services.

“When they grow up and start to shop online, they will literally not know what it might mean for a business to be contactable by email,” Mr McCabe said. “They will certainly expect the types channels they’ve been using with their friends and family for forever. Messengers and messaging is definitely the future. We bet on that in 2011. Right now is the time is where it is really starting to kick off.”

The fourth version of the messenger product will be a fundamental rethinking of what the product is, he said.

Although it has not provided updated revenue figures, the most recent available data, which is for 2016, put it at around $50 million. The company has 25,000 paying customers.

“I thought getting this far meant we would be slower, more corporate and settled down in our ways, and frankly that it might not be too much fun to be involved in a company of that size. I will say the opposite is true,” said Mr McCabe. “Now that you’ve figured out your place in the world, you have so many resources in terms of people and capital, and we’ve got a brand name out there, the opportunity is so much greater.

Intercom operates in Dublin, San Francisco and London. The company has plans to double staff numbers in all three locations over the next 18 months. That will bring the employee numbers to 800 from the current level of 464 people.

1 Ryanair wants Irish courts to block Skyscanner from selling its flights
2 Who are Ireland’s 17 billionaires?
3 Cathay Pacific to resume Dublin-Hong Kong flights in March
4 How to . . . move (almost) everything to your new phone
5 Are there annual limits on inheritances or gifts to a child?
Real news has value SUBSCRIBE