Samsung hopes folding phone will feel like value for €2,000-plus 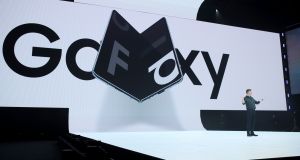 Have you seen the price of Samsung’s new foldable phone? The Galaxy Fold, which was unveiled in San Francisco this week, will cost a whopping $1,980 when it makes its debut on April 26th. And that’s in the US. The Irish price tag is likely to be more than that, so expect to see it cost more than €2,000 when it finally arrives here.

The Galaxy Fold is not your average smartphone: its foldable display transforms from a phone into a tablet when it is opened. Still, even the most cynical among us would have taken a breath when the price tag was revealed. To put it in context, it is more expensive than Apple’s top-end 12.9in iPad Pro and likely to be more expensive here than one of Samsung’s own Frame 55-inch TVs. In other words, it’s expensive even by today’s standards.

The cost of smartphones has been creeping up gradually in the past couple of years. But consumers are pushing back. Unsurprisingly, after spending a significant amount of money on a smartphone, anecdotal evidence suggests they are stepping out of the established upgrade cycle because they feel latest phones are simply too expensive for the features they are offering.

Both Samsung and Apple have seen their sales decline as cheaper rivals pick off their customers.

At the heart of it is consumers’ perception of value for money. While phones have been upgrading their cameras and messing about with augmented reality emojis, there hasn’t been a big “wow” factor in the industry for a while. But, still, prices have continued to rise.

Could the Galaxy Fold change that? In a market that has been accused of failing to produce real innovation in recent years, Samsung has laid down the gauntlet and created another new category.