Caveat: Facebook and law, Eir’s enraged customers, and no smiley face from Fatah 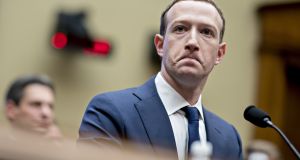 The most damning and deliberately evocative line in this week’s UK parliamentary committee evisceration of Facebook’s business model and behaviour was the one that likened the company, and the other social media platforms, to “digital gangsters”.

“Companies like Facebook should not be allowed to behave like ‘digital gangsters’ in the online world, considering themselves to be ahead of and beyond the law,” wrote the members of the House of Commons digital committee.

The committee forcefully concluded that Facebook has “intentionally and knowingly violated both data protection and anti-competition laws”.

The entire report was akin to a punishment beating for Facebook, a deliberate public mauling designed to warn web giants that their halcyon days of self-regulation are ending.

Taken from the perspective of this side of the Irish Sea, the report could also be viewed as a warning to policymakers to be wary of this State’s digital behemoth friends.

As we all know, friends can occasionally get you in trouble when you invite them round for a party. If they don’t behave, if they get too noisy, they might upset the neighbours. And long after the party ends and your “friends” have left, you’ll still have to live next door to someone.

If web giants, principally Facebook, are viewed by elected members of UK parliament as akin to “gangsters”, then how must they view Dublin?

Chicago was notorious as a base for real-life gangsters during the 1920s – Al Capone, Bugs Moran and others: Dublin doesn’t seem much like Chicago. It’s too short, for starters. Kennedy Wilson’s Capital Dock, at 259ft tall, and Liberty Hall, at 195ft, are mere leprechauns in comparison to the soaring towers of the windy city. We’re much too Lilliputian to be anybody’s Chicago.

Dublin looks even less like Ciudad Juarez, the Mexican border town that became notorious from the mid-2000s onwards for certain negative associations. Thankfully, it has calmed down in recent years, as the bad hombres realised that fighting the authorities there was bad for business.

Realistically, if you were a “digital gangster”, or a gangster of any sort, you want an isolated base away from population centres, where you can see threats from authorities coming. In the olden days, that meant something like the famous Hole-in-the-Wall in the mountains of Wyoming. But an island would do just as well.

If we are to be fair, the “digital gangster” line in the UK parliamentary report is probably a bit gratuitous. It was specifically designed to grab headlines and to wound. Facebook and other companies are subject to the law, and we must assume they will obey it, until somebody proves otherwise in an appropriate forum.

But even the merest association with the intemperate climate that is building up around Facebook and other web companies is damaging for Ireland. The damage is happening already.

On November 27th, Elizabeth Denham, the UK’s information commissioner, and her deputy, Steve Wood, gave public evidence in Westminster to the parliamentary committee. Eamon Ryan of the Green Party and Fine Gael’s Hildegarde Naughton, who chairs our own Oireachtas communications committee, were present as part of the UK parliament’s attempts to build an international “grand committee” to hold social media giants to account.

Denham explained to the British politicians that the Irish Data Protection Commission was the lead authority in Europe for regulating the company’s stewardship of the private information of hundreds of millions of people, as Facebook’s international headquarters is in Ireland. But, the report said, it was Denham’s view that Facebook doesn’t view rulings from the Irish DPC as “anything other than advice”.

“Unless there is a legal order compelling a change in their business model and their practice, they are not going to do it,” testified Denham, who further explained to the British politicians that her office was referring data cases to Dublin.

According to the transcripts, she was then asked a blunt question by Tory MP Julian Knight that should illustrate to all in Leinster House the reputational risk, internationally, of giving web companies free rein here: “Given Ireland’s record with firms locating there, basically to avoid tax, do you think they will be as firm as they ought to be in pursuing Facebook and ensuring that these potentially current transgressions are properly punished in a way that the public has confidence in?”

This was a prominent British politician, who has since been promoted to one of the most senior positions in the UK treasury, wondering aloud and in public if Ireland can be trusted. It was extraordinary.

“The new [data] regime promised to really punish these firms when they transgress in this way but it doesn’t look to me as if it has a great deal of teeth because of the issue of Ireland being in charge of the process,” added Knight.

Wood suggested that Ireland could be somewhat trusted. But the damage was done.

These are the risks this State has taken. Data protection and privacy; the protection of children online; the dissemination of fake news and electoral interference; tax avoidance; antitrust issues. It seems as if all of the hot-button, emotive topics of today that concern people and governments globally tread a path through Dublin.

- When Irish Times journalist Conor Pope devoted this newspaper’s Pricewatch consumer column on Monday to the mess that is Eir’s customer service, he lifted the lid off a pressure cooker.

It has prompted a week-long howl of rage from disgruntled Eir users, and Pricewatch and the letters page of this newspaper have read like group therapy sessions.

We’ve had an 85-year-old woman unable to summon an Eir engineer to fix her phone. People on hold for hours, with the promise that they will be called back, but hearing nothing. A woman with a locked iPhone for nine weeks.

It wasn’t supposed to be like this. When Eir ended its outsourced customer service contract last year with Indian operator HCL, one of the reasons for it was that Eir’s new French owners were shocked at the levels of customer service and wanted to take it back in-house.

Almost 1,000 jobs were “in-sourced”, while about 650 HCL Dublin-based workers were offered redundancy packages, as Eir prepared to shift the old HCL functions to regional centres in Sligo, Limerick and Cork.

The current customer service disaster must be seen in the context of that messy transition period. There had been fears within the company that it could get worse before it got better. Eir had better get a handle on the matter soon – its competitors are circling like sharks.

- As if things weren’t bad enough for Facebook, given the mauling it got in Westminster this week, there also appears to be no staunching the flow of cases taken against it in the High Court. People from outside the US who have complaints over comments posted about them on the platform must sue it in Dublin.

Last month, records show, Mohammad Dahlan, the former leader of the Gaza division of Palestinian group Fatah, filed such a case against Facebook Ireland. It is the second case he has filed against it in less than 18 months.

And to think: we originally thought Facebook was supposed to be all about friends and likes.