Irish farmers and their beef with no-deal Brexit tariffs

Cantillon: Some beef producers here may be wiped out by tariffs in no-deal scenario 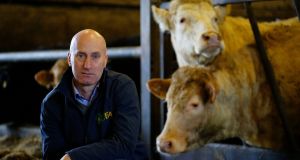 There is no doubt the food sector and particularly the beef industry would be at the sharp end of a no-deal Brexit. Not only would it face extra costs from new bureaucracy and the threat of delays to the transport of fresh product but some producers would also face crippling tariffs that could price some or all of their product out of the UK market.

Beef is the most obvious example. Some 52 per cent of exports go to the lucrative UK market. For reasons of both taste and geography, Irish beef is popular in the UK and supplies most of the main supermarkets. In a no-deal scenario, however, it would face tariffs, or import taxes, payable on entry. According to industry estimates, these could amount to €750 million on product valued in the market at about €1.4 billion. This would wipe out a lot of the Irish beef trade to the UK.

This assumes that the British impose World Trade Organisation tariff levels, which are particularly high on beef. Michael Gove, the UK environment secretary promised British farmers this week that tariffs would be imposed to stop a flood of cheap products entering the market, though he did not confirm what level they would be set to.

Here, the industry and farmers are making demands for support packages from the Government and the EU. While both have promised to help, there is no clarity on what type or scale of assistance is likely and there is the risk that the need to get clearance from Brussels to comply with state-aid rules could delay some of the necessary moves.

The Government is to consider this at a series of meetings in early March. It faces some difficult calls. The omnibus legislation to be published on Friday will cover some important areas where legislation needs to change. But the really tricky no-deal Brexit issues will not be these.

They will be how to protect jobs and Irish incomes if the worse happens. We are already starting to hear businesses getting vocal on this issue both in the UK and here. But it is nothing compared to the cacophony we will hear in March if there is no solution in sight.