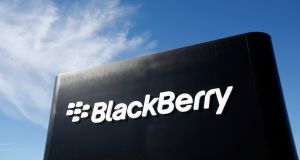 The company, which has sought to reinvent itself after the collapse of its smartphone handset business, reported a net loss of $275 million (€232.2 million) for the third quarter ended November 30th, compared with net income of $9 million a year earlier.

Revenue fell to $226 million from $301 million a year earlier and $249 million in the second quarter. Analysts, on average, expected revenue of $215.4 million.

1 Why gift a son now if it eats into his tax-free inheritance threshold?
2 Mortgage arrears: Prevention is definitely better than cure
3 Big Four told to outline plans for audit split in UK by October
4 Chris Johns: Economic self-harm is the root of populism
5 Irish pharma sector warns of protectionism as US corners supply
Real news has value SUBSCRIBE