Net neutrality faces the axe in the United States 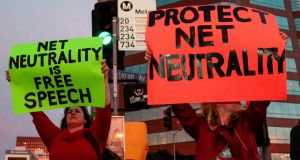 People protest during a rally in Los Angeles to ‘Protect Net Neutrality’ as they voice their opposition to the impending FCC vote on the matter on December 14th. Photograph: Kyle Grillot/Reuters

Net neutrality, the notion that all internet traffic should be handled equally by internet service providers, faces the axe in the United States.

His timing was interesting. That old adage about releasing controversial news when it can be most easily buried? Pai chose the days before the entire nation shuts down for the US’s biggest annual holiday of Thanksgiving, when offices close and most Americans take a long four-day weekend to travel to see family.

But the strategy didn’t prevent a steady build-up of public and private opposition to the proposals, especially out in Silicon Valley, where the issue drew widespread attention and news coverage.

There’s little doubt the FCC wanted to mute this story to dampen opposition. Killing net neutrality is not just controversial, but deeply unpopular with the US public. A massive pro-neutrality campaign helped sway the previous FCC administration’s net neutrality decision. Using formal FCC public commenting processes in 2014, 2015 and again this past year, millions of people have told the agency they oppose ending net neutrality.

The public knows the FCC’s proposal stinks. Under Pai’s plans, ISPs will be allowed to decide whether to block websites, and can charge service providers more to deliver, or consumers more to access, services.

The services most likely to be targeted will be those requiring greater internet bandwidth, such as streaming services (think Netflix, YouTube or Spotify) or constantly-accessed, bandwidth-demanding services such as search engines (think Google).

Pai would reclassify broadband from designation as a telecommunications service (and therefore subject to FCC regulation) to an information service (which the FCC is not allowed to regulate via net neutrality rules).

Thinking of launching a video streaming service, without the budget of a Google? Good luck with that

They’ll be dumped onto an internet toll road where travelling in some lanes of traffic will cost more, and some locations along the way will be blocked. Start-ups will also face new obstacles. Service delivery costs would make it hard for rivals to emerge to dominant players, especially in big-bandwidth sectors.

Thinking of launching a video streaming service, without the budget of a Google? Good luck with that.

Yet the FCC and Pai keep arguing their plans will allow a market-based approach that would increase internet investment and innovation.

You’d be hard pushed to find any company beyond internet service providers like Verizon and Comcast agreeing with that position. (Verizon argued in a blog post that Pai’s proposals would protect consumers without making them “bear the heavy costs from unnecessary regulation that chases away investment and chills innovation.” Right.)

Logically, you might think that Pai-supporting Congressional Republicans would be concerned that no actual companies, large or small, in the internet sector believe they will benefit from all that supposed new investment and increased innovation.

More than a thousand startups and supporting organisations such as venture funds and business incubators like Y-Combinator, have already sent a public letter (http://www.engine.is/startups-for-net-neutrality/ ) to Pai stating that it is in fact, net neutrality which ensures investment and innovation.

“America’s startup ecosystem depends on an open internet with enforceable net neutrality rules, ensuring that small companies can compete on a level playing field without the threat that their services will be discriminated against by big cable and wireless companies,” they state.

Big Valley companies like Facebook and Google were also quick to express unhappiness. Consumer and internet organisations also lined up in opposition. The Electronic Frontier Foundation (EFF) has started a campaign to target Congress (http://bit.ly/2BlYDCT).

Organisations such as Fight for the Future are rallying under the Battle for the Net banner to help people contact Congress and to organise protests on December 7th.

But this is a logic-free zone in Washington DC. So far, only a single Republican in Congress has publicly come out against the proposals.

The best resolution would be to remove the FCC from having the power to impose or remove net neutrality, a task that could be accomplished by having Congress legislate in this long-neglected area.

Some pundits believe an anti-net neutrality vote will be so unpopular that it is just the thing to spur Congress to take action.

Far too many critical US federal laws around security, privacy and telecommunications come from the pre- or early internet era and desperately need updating. Yet for years, nothing has happened. Witness the Microsoft Ireland email case scheduled to be heard by the Supreme Court. Don’t expect net neutrality to wake Congress up.

In addition, Trump-era Republicans in Congress haven’t shown an appetite for doing much legislating, full stop. Unless US mid-term elections flip the Republican majorities in Congress, expect to say goodbye to US net neutrality for the foreseeable future, after the FCC votes on it on December 14th.