Playable Ads allows users try your app before they buy

Weblog: Developers can use new Windows 10 feature to show interactive preview of apps 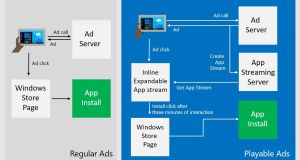 This feature works for three minutes, at which point you can click to download or pass on the opportunity

Playable Ads is a new developers’ feature for Windows 10 that gives developers the opportunity to show an interactive preview of their app to potential customers. What this means for Windows 10 end-users is that they can click on Playable Ads to use an app as if it is already installed on their device without having to download or pay for it.

This “try before you buy” feature works for three minutes, at which point you can click to download or pass on the opportunity. And developers need not code anything new to get started – just a few clicks and the Playable Ad is generated at Microsoft’s end.

This is part of a growing trend for interactive mobile ads and follows Google’s launch of Android Instant Apps this past January. Similarly, Instant Apps allows for basic app interactivity before the user decides to download.