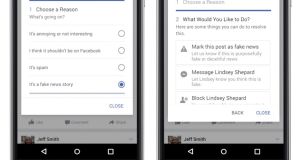 Fake news on Facebook got 8.7 million likes, shares, comments or other forms of engagement in comparison to 7.3 million interactions for real news in the period between February 2016 and November 8th, 2016 (US election day).

As promised in December 2016, the social networking site has begun to tackle its significant fake news problem.

Going live first in the United States, Facebook has started labelling stories from fake news sites as “disputed” while providing the source of publishers such as Snopes. com">Snopes.com and Politifact who have evaluated these stories and found them to be false or misleading.

This is part of Facebook’s programme to work with third-party fact-checking organisations that are signatories of Poynter’s International Fact Checking Code of Principles.

Facebook has also announced its intention to make reporting of fake news easier for end-users. In addition to existing options for reporting a post (It’s annoying or not interesting; I think it shouldn’t be on Facebook; It’s spam), there will be a separate option to report fake news.