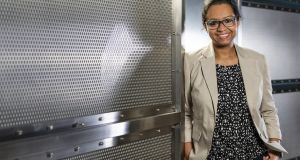 Munmun De Choudhury: “We see that they [successful dieters] are much more likely to share healthy recipes, offer tips on nutrition and exercise, and report on their own progress.”

The language used in tweets and the size of an individual’s Twitter network can predict how successful their diet will be, according to researchers at the Georgia Institute of Technology in the US.

Analysing over two million tweets from almost 700 users who had linked their account to the food and exercise tracking app MyFitnessPal, researchers found that tweets containing positive, upbeat language were linked to individuals who stuck to their dieting goals (as detailed in their MyFitnessPal diary). Additionally, the more followers they had, the more successful they were likely to be.

Lead researcher Munmun De Choudhury said: “We see that they successful dieters] are much more likely to share healthy recipes, offer tips on nutrition and exercise, and report on their own progress,” adding that their larger social network offers a strong support system.

Meanwhile, unsuccessful dieters tend to post tweets with an overtly negative tone, focusing on how painful a workout is or how miserable their diet is making them feel.