Review: Samsung’s Galaxy A5 punches above its weight 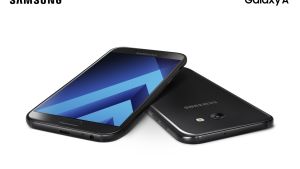 It’s becoming increasingly difficult for smartphone manufacturers to differentiate themselves in a very crowded marketplace. There is, after all, only so much technology you can cram into a small device before it starts to look like overkill. Likewise, there are only so many things you can say about smartphones while reviewing them before it starts to feel as if you are repeating yourself.

So, with that in mind, the 2017 edition of the Samsung Galaxy A5 is up for scrutiny. Looks-wise, there isn’t a huge amount about this phone that makes it instantly recognisable. Unlike its cousin, the Galaxy S7 Edge, the A5 is more of a stock black metal-and-glass affair, which means it blends in with the crowd. It doesn’t look bad, but it’s a fairly standard-looking smartphone.

But that’s not necessarily a bad thing. The real pull for this phone is not in its ability to dazzle with design, but in its impressive features. You may have wanted the S7 or its more eye-catching S7 Edge sibling, but you would pay through the nose to get it.

The A5? Not so much. Available in Ireland for about €390 on prepay, it’s significantly more budget-friendly than the flagships.

I hesitate to use the word cheap, because the A5 certainly doesn’t give off that vibe. The device comes with a 5.2in AMOLED display, which looks brilliant for just about anything you throw at it. Usually, you’d expect that from the high-end Samsung phones, so it’s a nice surprise to see it in a mid-range phone that won’t bankrupt you.

The camera, too, is one that would stand up to scrutiny on a higher-priced phone. It’s 16 megapixels both front and back – a nod to the growing importance of the selfie camera for phone buyers – and will take some decent photos in the right light. It struggles a little in poorer light conditions, with a little too much grain for my liking. There’s a single LED flash instead of the double that you’d find on the higher-end devices, and the lack of optical image stabilisation on video can be seen in the resulting footage.

Unlike the HTC U Play, the A5 is clinging on to the headphone jack – for now. However, Samsung has made the leap to USB-C to charge, marking another model to fall in with the new standard.

Overall, the standard of mid-tier phones has risen impressively in recent years. The A5 isn’t breaking with trend, which means its a worthy contender in the market.

The A5 feels surprisingly sturdy, and although it may look a bit plastic on the back, it’s not. It has a glossy finish on the back, and an all metal-and-glass body that means it should stand up to some rough treatment. It’s also IP68 rated, which means it will resist water and dust, although you might not want to push that too far.

The display is decent too, with a 5.2in AMOLED screen that is bright when it needs to be, and responsive – and is full HD too.

The fingerprints. While the A5 may have a glossy finish, that can also bring with it the perennial problem of fingerprints. Within a minute or two of handling the phone, you’ll want to clean it.

The camera performs well in good light, but can struggle a little when the lights go down. It doesn’t quite meet the standards set by the S7, although you can’t expect everything for the lower price.

You get what you expect from a Samsung phone here: the fingerprint reader, the extra security settings brought by Knox, and the fairly good camera. It’s just the price that might surprise you.

Although it may look on the surface like just another Android phone, there are hidden depths to it.