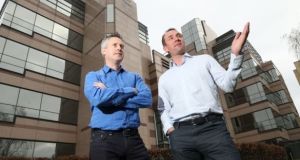 Dublin-headquartered fintech start-up Flender, whose backers include former EY Entrepreneur of the Year award winner Mark Roden, is set to announce a €50 million debt financing round to fund its expansion.

Flender, which bills itself as the “friendly crowd finance” company, went live with its online peer-to-peer (P2P) lending platform for small and medium-sized businesses just over a year ago and has helped Irish companies raise more than €1.28 million to date.

Having secured more than £500,000 (€569,000) to fund itself through crowdfunding, Flender announced plans to raise a £2 million (€2.2 million) funding round and £20 million (€22.7 million) in leveraged debt finance last August after receiving full authorisation from the UK financial regulator to operate in Britain.

The start-up is due to announce it has raised €50 million in debt financing to launch a new property-backed P2P service that will allow far bigger sums to be lent via the platform. The finance will also be used to more quickly fund deals and to further the company’s expansion in new markets that include Spain and eastern Europe.

Flender will also announce a number of new investors, with Enterprise Ireland thought to be among the backers.

Current investors include Mr Roden, founder of Irish mobile payments company Ding and a co-founder of Esat Digifone. Also on board as an investor and as the company’s chairman is Philip Grant, who started the accountancy practice RSM Farrell Grant Sparks, which merged with Grant Thornton in 2015.

Flender was established by Kristjan Koik, Oli Cavanagh and Jeremy Davies in October 2014. It enables businesses and consumers to lend and borrow money through an app that links in with social network connections. There are no lender’s fees attached, unlike most platforms, but there is a success fee and what the company calls “a small interest margin”.

Speaking to The Irish Times recently, Mr Cavanagh, Flender’s chief commercial officer, said the company has what he believes is the lowest default rate among P2P lender at just 0.01 per cent after its first year of trading.

It also claims that more than 100 jobs have been created by companies raising money via its platform over the last 12 months.