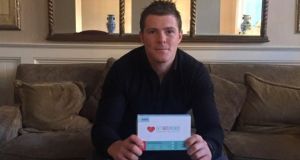 LetsGetChecked founder Peter Foley: the company has more than 30 tests for general health, sexual health, cancer screening and fertility checks available in the US, Canada and 14 European countries.

LetsGetChecked, a Dún Laoghaire-based start-up that has developed a diagnostics platform to enable private self-testing for a number of health-related problems including sexually-transmitted infections (STIs), has raised $12 million (€9.7 million) in a Series A funding round.

The funding round was led by the Silicon Valley-VC firm Optum Ventures, which backs high-potential health tech firms. Other backers include the Shanghai-based Qiming Venture Partners, which manages four funds with over $1.2 billion in assets.

Founded in 2014 by Peter Foley, LetsGetChecked is a medical technology platform linking customers to regulated laboratories to better manage and control their personal health.

The company’s first product was an STD test and it had previously raised about €350,000 in seed capital back in 2015.

LetsGetChecked now has more than 30 tests for general health, sexual health, cancer screening and fertility checks available in the US, Canada and 14 European countries.

Pricing for the tests start at about €50 each and usually only require a simple prick of the finger. The company promises to deliver results within five working days.

The start-up said it intends to use the funding to invest further in its technology platform and to continue expanding in the US.

“Support from investors with proven track records of helping to modernise healthcare like Optum Ventures and Qiming Venture Partners is a true testament to the work we’re doing,” said Mr Foley.

“With easier access to testing, individuals can change how and when they are diagnosed, leading to better clinical outcomes. Our goal is to provide individuals with greater control of their health through accessible technology and to continue partnering with more labs and health systems, to bring more specialised testing direct to consumers,” he added.