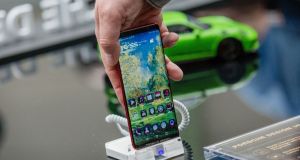 Huawei’s beefed-up spending on R&D is likely to fuel fears in the US administration that Chinese companies will spearhead standard-setting in next-generation technologies. Photograph: Bloomberg

Huawei spent a record $13.8 billion (€11.2 billion) on research and development last year, ranking the Chinese tech giant among the world’s top spenders, and projects its budget will rise to as much as $20 billion each year.

The beefed-up spending is likely to fuel fears in the US administration that Chinese companies will spearhead standard-setting in next-generation technologies, including networks. US concerns of snooping and state support – denied by Huawei – have seen the company effectively frozen out of the US market, unable to sell either telecoms kit or even handsets at any scale.

Ken Hu, Huawei’s deputy chairman and rotating chief executive, said the challenges in the US would make the company work “even harder in other markets around the world”.

As a commercial company, Huawei sought to earn profits globally, he said. “But for one reason or another unfortunately we are not able to do business over there [North America] and we feel sorry for it,” he said.

The R&D budget, which equates to 15 per cent of sales, ranks the Chinese tech giant third among groups globally, just behind Alphabet, according to research group Statista.

The news comes amid fears within the White House of Chinese advancement in fifth-generation (5G) high-speed data networks. This has prompted US president Donald Trump to block Broadcom’s acquisition of Qualcomm, fearing the deal would mean cost cuts and undermine the US chipmaker’s ability to compete with Huawei in 5G.

In a letter earlier this month, the US committee on foreign investment, an inter-agency body that vets takeovers, said Qualcomm owed its “technological success and innovation” to its R&D spending, which typically ranked it second among chipmakers only to Intel.

“This expertise and R&D expenditure in turn drive US leadership in key standard-setting bodies, and Qualcomm has been a leading participant in standards setting for 3G and 4G,” wrote Aimen Mir, the US treasury department’s deputy assistant secretary for investment security.

A reduced role for the US company would open the door for China, he added, naming Huawei as one contender. “Huawei has increased its R&D expenditure and owns about 10 per cent of 5G essential payments,” he wrote.

Mr Hu said R&D spending would be directed at talent, technology, equipment and partnerships. “The goal of these investments is to help us overcome challenges we still face in technology innovation,” he said.

The ramped-up R&D spending emerged as Huawei, which is owned by employees, announced net profits of Rmb 47.4 billion (€6.2 billion) last year, up 7.9 per cent year on year, on the back of revenues of Rmb 603.6 billion.

Sabrina Meng, chief financial officer and daughter of founder Ren Zhengfei, attributed the growth to improved financial discipline in the handset division. The unit, which accounts for 39 per cent of group revenues, saw margins pummelled in 2016 by big spending on marketing and other costs.

The backbone carrier business, which accounts for half of revenues, grew sales just 2 per cent as telecoms operators’ capital expenditure cycle slowed after the 4G upgrade and ahead of the 5G ramp-up. The Americas – virtually all Latin America – was especially badly hit, with revenues down 11 per cent year on year. – Copyright The Financial Times Limited 2018