Map of mobile and broadband coverage to be published 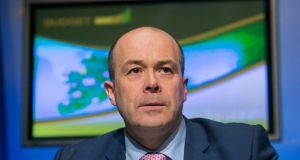 A national map of the quality of mobile coverage offered by different phone operators is to be made available to consumers following a recommendation by the Government’s Mobile Phone and Broadband Taskforce.

The map, to be published by communications regulator ComReg, will help consumers choose between providers in their region based on the level of service they offer, according to Minister for Communications Denis Naughten.

In another of the taskforce’s 40 recommendations, the Advertising Standards Authority for Ireland will be asked to review its guidelines for telecoms marketing so that fewer consumers are given “a false or misleading impression” of the type and speed of broadband for which they pay.

A new licensing regime will also be introduced for people who use mobile signal amplifiers to boost indoor coverage in rural areas. Mr Naughten said the use of these “repeaters” had been “a grey area up to now”.

Poor broadband and mobile connectivity is blighting rural counties, with the advent of high-speed services under the National Broadband Plan (NBP) delayed on several occasions.

“I am critically aware of the frustrations being felt across Ireland,” Mr Naughten said.

The taskforce, set up under the programme for government, was designed to identify “quick fixes” ahead of the rollout of the NBP, which will see contracts awarded next year and “shovels in the ground” in 2018.

The Minister said the introduction of high-speed broadband services under the NBP would “dramatically transform” rural Ireland, but that there were things that could be done in the meantime.

About half of the recommendations in the taskforce’s report will be implemented immediately, although it will likely be 2018 before the ComReg map of mobile services is published.

“We have a commitment from the industry that they will provide us with the data that is available to them, but it is important that we stress-test that,” Mr Naughten said.

The Telecommunications and Internet Federation, the Ibec group that represents the telecoms industry, welcomed the report and said the focus must now turn to implementing it.

Many of the measures are aimed at alleviating local authority bottlenecks encountered by telecoms operators as they seek to build or upgrade their broadband and mobile networks.

Mr Naughten said commercial operators were spending €1.4 million every day as they extended their mobile, wireless broadband and fixed-line broadband services. “We’re trying to fast-track as much of that as we can.”

Telecoms companies will now be able to deal with “a single point of contact” in local authorities, rather than have to talk to several departments, such as road, water and legal services, he said.

Local authorities will come under pressure to “move quicker” because telecoms companies that encounter barriers to rolling out services will simply move along to the next county “and do the investment there”, he added.