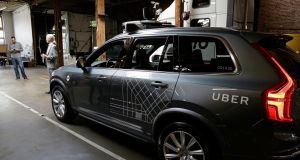 Slowdown in Uber’s growth can be partially explained by the company’s decision to leave China. (AP Photo/Eric Risberg)

Even as Uber Technologies exited China, the company’s financial loss has remained eye-popping. In the first nine months of this year, the ride-hailing company lost significantly more than $2.2 billion, according to a person familiar with the matter.

In the third quarter, Uber lost more than $800 million, not including its Chinese operation. At the same time, the company’s revenue has continued to grow even after leaving the world’s most populous country.

Uber generated about $3.76 billion in net revenue in the first nine months of 2016 and is on track to exceed $5.5 billion this year, said the source, who asked not to be identified.

Uber, a closely held company based in San Francisco, has stayed mum about its financial performance even as its valuation has soared to $69 billion, making it more valuable on paper than General Motors Co and Twitter Inc combined.

Uber said on August 1st that it came to an agreement with Didi Chuxing to exit China in exchange for 17.5 per cent of the Chinese company. As part of the deal, Didi invested $1 billion in Uber.

Uber’s third-quarter financials don’t include the business in China, which were part of the previous quarterly results. Net revenue – the amount of money Uber generates after it pays its drivers – was $1.7 billion in the third quarter, growing from $1.1 billion in the second quarter and $960 million in the first, according to the person.

Uber’s financials have leaked in dribs and drabs. The third-quarter numbers were reported earlier by the technology news site The Information. Bloomberg previously reported Uber’s financial performance in the first half of this year. A spokesman for Uber declined to comment.

The company is said to have lost at least $2 billion last year and is on track to pile up a loss of at least $3 billion this year. Those are rough figures that may underestimate how much money Uber is losing and don’t include interest, taxes or stock-based compensation.

Lyft, Uber’s largest US competitor, has promised investors that it will keep its losses below $150 million a quarter.