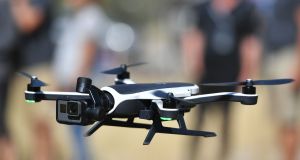 Vodafone is looking to move into the lucrative business of managing drone traffic, after meeting European aviation safety authorities about adapting its network to track and identify unmanned aircraft.

The approach, by one of the world’s biggest telecoms companies, comes as regulators seek to develop a framework to integrate drones safely into international airspace by 2030.

Sesar, the European project to overhaul the region’s air traffic management, estimates there could be more than 400,000 commercial and government drones in its airspace by 2035, many at low levels and over densely populated areas. Drones flying at up to 500ft are expected to account for 250 million flying hours by 2050, against 33 million for manned aircraft in controlled airspace.

Vodafone’s proposal was made in response to the publication of prototype regulations this summer by the European Aviation Safety Agency (EASA), which opened a consultation period on ways to certify, control and regulate unmanned aircraft. Less than a month ago the telecoms company was invited by the agency’s top officials to discuss its proposal for the management of unmanned air traffic.

Nokia, the Finnish IT company, has also signed a deal with Dutch authorities to trial a drone traffic management system at Twente Airport.

The push to connect drones is a natural move, according to sources within Vodafone. In the race to replace declining revenues from voice calls, roaming and texting, many telecoms companies have looked to the enterprise market. Vodafone has 45 million SIM cards installed in machines not typically associated with mobile phones, including smart meters, semi-autonomous cars and even in tracking equipment attached to seals.

Initially, consumer drones could be required to insert and register a SIM, similar to their use in the mobile market. The mobile network could then be used to enable communication between drones to avoid collision and no-go areas. Vodafone could also use its network for flight authorisation.

The company has its eyes on the bigger prize of the commercial market, where companies such as Amazon are trialling drones for deliveries. Further out, Vodafone is hoping its technology will be applicable to larger unmanned aircraft, which could be used for cargo.