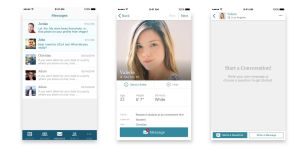 In a bid to get a slice of the singles market during the holiday season, online dating company eHarmony has relaunched both its app and website. One of the new features is instant messaging, which is ho-hum and years behind other dating sites but it has also been leveraging its dating data to create a new compatibility scoring feature called “The Two of You Together”.

This feature promises to rate potential matches on their top-scoring three attributes from categories including emotional energy, kindness and intellect. eHarmony has also promised to significantly trim down its online questionnaire for new users, making it easier for them to get started on the site, which is a good thing considering January 1st-3rd are the three busiest sign-up days of the entire year for the dating website.