Testimony from Deloitte consultant backs up allegations made by Rivada Networks 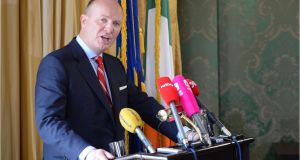 Declan Ganley, whose Rivada Networks is in dispute with the Mexican government over bidding for a wholesale mobile network. Photograph: Dara Mac Dónaill

A US-based Deloitte consultant who advised the Mexican government on the bidding process for a $7 billion (€6.7 billion) mobile network contract has alleged under oath that Mexican officials tried to rig the process against an Irish-owned company.

The consultant’s testimony appears to buttress allegations made by Galway businessman Declan Ganley’s Rivada Networks that it was improperly frozen out from bidding for the project, known as Red Compartida.

Brett Haan, a principal with Deloitte Consulting, made the allegations on Tuesday while giving sworn evidence in New York, after Rivada got a court order compelling him to give a deposition over his knowledge of Red Compartida.

Deloitte advised the Mexican government on the bidding process for the project, which is to build a state-backed wholesale mobile network to aid competition in the sector in Mexico.

Rivada was excluded at the 11th hour from bidding last month, and the contract was awarded to a rival bidder, the Mexican-led Altan group.The Mexican authorities in charge of the bidding and Altan have denied any wrongdoing.

Mr Haan, against whom no allegations have been levelled, told Rivada’s lawyers on Tuesday in his deposition that he met with Richard Keith, a former colleague, in a Washington restaurant after the bids were submitted.

His said Mr Keith told him that one of the bidders submitted a proposal that was “essentially a photocopy” of the supposedly secret evaluation document that had been prepared by Deloitte and given to Mexican government officials.

Mr Haan said if this was true, then the bidding process was “unfair”.

Mr Haan also alleged that a named Mexican official told him he wanted the contract to go a group involved in the Altan consortium, even before the bidding process had started, and that he wanted Mr Haan to help arrange it.

Rivada got an order from a federal court in Virginia compelling Mr Haan to give evidence to help it with a case it is taking in Mexico over its exclusion from Red Compartida.

Rivada said the situation surrounding its proceedings in Mexico was developing “rapidly” and pushed for the swift deposition of Mr Haan. It alleged the final award of the contract was being brought forward.

In US court documents, Rivada alleges there is an “overlap” between Altan’s successful bid and the so-called business model evaluation document.

Rivada says the testimony from Mr Haan will help to “establish the overlap” between Altan’s bid and the business model document.

“The overlap was so substantial as to demonstrate that the business model served as the template for the Altan consortium bid,” it said.

Previously, Mr Ganley has alleged that a hijacker attempted to steal Rivada’s bidding documents as they were being delivered in Mexico city.