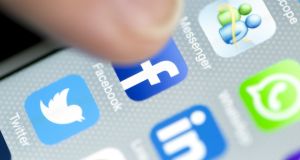 The EU average currently stands at 45 per cent, with Ireland coming in second in the 28 states behind Malta at 71 per cent. Poland brings up the rear, at 25 per cent.

Most businesses said they used the new medium as a way to connect with customers, with 65 per cent keeping in touch through Facebook and Twitter. That has risen steadily in the past few years, with 62 per cent of enterprises using such networks in 2015 and 58 per cent in 2014.

About a third of businesses employing 10 people or more use blogs or services such as Twitter, up from 30 per cent last year, while YouTube and other multimedia content sharing sites were up to 23 per cent.

Just more than a third of Irish enterprises have paid for advertising online, while more than half of large enterprises conduct sales online. However, that figure falls to just over a quarter for smaller businesses.

Chief executive of Chambers Ireland Ian Talbot said it was a concerning trend.

“Indigenous Irish SMEs must look to reap the benefits of the European Digital Single Market, particularly given the need to identify new markets post-Brexit and in the event of UK withdrawal from the Single Market,” he said.

“When planning for 2017, small businesses should look to the opportunities to develop their online capacity through the Trading Online Voucher Scheme and the Innovation Voucher initiative.”