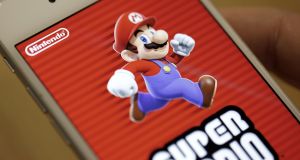 Nintendo’s debut game for smartphones is turning out to be anything but super. Since its release for Apple devices on Thursday, Super Mario Run has shot to the top of download charts in more than 100 countries as tens of millions celebrated the iconic video game character’s arrival on iPhones.

Yet problems emerged almost immediately, with thousands vigorously complaining that the three levels available with the free download were over too quickly – in less than 10 minutes in most cases – and the $10 (€9.60) price tag to unlock the rest was too steep.

That backlash is now reverberating through its share price, with Nintendo’s stock dropping by 11 per cent in the two trading days since the game’s release, wiping out more than $3.5 billion in market value. Investors and analysts are starting to second-guess the company’s decisions and its ability to execute on mobile devices.

“A $10 upfront cost to unlock the game is a huge ask and one that flies in the face of current mobile games being free-to-play,” said Daniel Ahmad, an analyst for researcher Niko Partners. “The first three levels are not very long and the payment screen doesn’t seem to make it abundantly clear what the user is getting in return for that $10 purchase.”

Those comments mostly echo the reaction online, where more than 100,000 users have posted ratings on Apple’s App Stores in the US, Japan and elsewhere, ranking the game at two and a half stars out of five. That’s among the lowest for apps at the top of download rankings, and below other games such as Clash Royale, Candy Crush Saga or Monster Strike.

Besides the high price, reviewers focused on Nintendo’s decision to require an internet connection, with many complaining they couldn’t play during their commutes. Others said the over-simplified game-play removed features that are a staple of Super Mario games on consoles, such as fireballs.

“The negative reviews aren’t necessarily because it’s a bad game,” said Eliran Sapir, head of Apptopia. “It’s a combination of the high price tag and fans not liking the vehicle.”

Sapir said poor word-of-mouth could affect the game’s profitability. While the game has become the highest-grossing game in most countries, it could only reach third place in Japan – the world’s third-largest app market, according to App Annie.