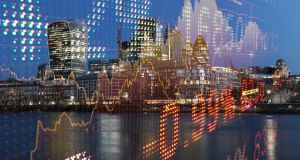 Irish fintech company Fenergo has closed an $80 million (€73.35 million) investment round, with backers such as Dutch bank ABN Amro in a deal, which places a valuation of about $800 million on the company.

The Dublin-headquartered company said on Wednesday the fundraising also included investment from DXC Technology, a New York listed company that provides business to business IT services.

This round includes $74 million that DXC invested in a deal previously reported by The Irish Times and the majority of the remaining $6 million is believed to have come from ABN Amro.

The Irish Times understands the $80 million round represents a roughly 10 per cent stake, thus valuing Fenergo at about $800 million.

The company, which was spun out of Irish tech veteran John Purdy’s Ergo Group, develops solutions for financial insitutions that helps them with issues such as regulatory compliance and managing client data. Its customers include BBVA, ABN-AMRO, RBS, Bank of China, UBS and State Street.

In recent years the company has expanded into new sectors such as asset and wealth management, and in doing so has added key customers including Royal Bank of Canada, UBS and Mizuho.

Fenergo said the funding will help it further enhance its products and potentially acquire news business units seen to be “strategically important”.

“We are delighted to join ABN Amro Ventures and DXC Technology’s investment portfolio. Their pedigrees, deep experience and industry knowledge make them both ideal investment partners for Fenergo,” he said.

Fenergo competed a €106.3 million share buyback in September. Mr Murphy said that a public offering remained on the cards but has been pushed out by “a couple of years” on the back of its latest fundraising.

In December, the company reported a 21 per cent rise in turnover from €57.8 million to €70.1 million in 2018, which included a 35 per cent increase in software licence revenue.

Fenergo also recorded a pre-tax loss of €12.9 million as against a €2.6 million profit a year earlier.

It last year doubled its spend on research and development to almost €20 million, while headcount rose by 44 per cent. It currently employs about 800 people across 14 offices globally.