Ginni Rometty to step down as IBM chief executive 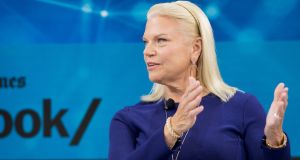 Ginni Rometty, the longtime face of IBM and one of the most prominent female business leaders, is stepping down as chief executive, the company said Thursday.

Ms Rometty, who became chief executive in 2012, struggled to achieve growth at the technology giant as it made the transition to new fields like cloud computing and artificial intelligence. She will be replaced in April by Arvind Krishna, who now runs the company’s cloud computing business.

The timing of the departure of Ms Rometty (62) came as a surprise, made after the close of the market Thursday in a lengthy statement filled with praise from IBM’s board. She will remain as executive chairwoman of the board until the end of the year.

Ms Rometty was one of the top female executives in the corporate world, a frequent speaker at conferences, and liked and admired by her chief executive peers

. Her assessments of the challenges facing IBM, an old-line technology company making a difficult transition, were clear-eyed and candid. In an interview in 2014, for example, she said the next couple of years would be a “rocky time” for IBM.

But the failure to reach the crossover point – when the growth of the new businesses like cloud computing, data analytics and artificial intelligence grew faster than older hardware, software and services business – frustrated Wall Street. During her tenure, IBM’s stock price slipped at the time when the stock market in general rose sharply.

Shares in the company rose more than 4 per cent in after-hours trading. Yet even Wall Street analysts who were often critical of IBM’s performance during her leadership acknowledged that she had inherited key challenges. IBM, they note, was slow to adapt to cloud computing – computing tasks done on remote computers, owned by others. The leaders have been Amazon and Microsoft, and Google is pushing hard to capture that corporate business as well.

In August 2019, IBM bought Red Hat, the largest distributor of the popular open-source operating system Linux, for $34 billion. At the time, many analysts said that the deal meant that Ms Rometty would probably stay on until the end of this year. But her two predecessors, Samuel Palmisano and Louis Gerstner jnr, both retired at 60. – New York Times 2020