Move, which has been long touted, comes as fintech plans to roll out new credit offerings 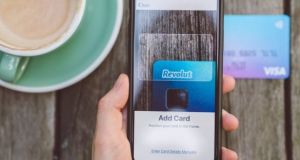 Digital challenger bank Revolut has confirmed it is planning to shift responsibility for its European payments from London to Dublin as a result of Brexit.

The move, which has long been touted, comes after the company last year followed in the footsteps of the likes of Facebook and Stripe in applying for an emoney licence from the Central Bank of Ireland.

The fast-growing financial technology group, which claims to have 500,000 customers in Ireland and more than seven million globally, recently advertised for a number of roles in the Republic, including for a new chief financial officer and a chief risk officer.

It employs 12 people here and said it plans to expand the Irish team to between 40 to 50 people this year.

“We remain committed to having London as our global headquarters, with Ireland planned to take on our western Europe activities subject to authorisation from the Central Bank of Ireland,” said Richard Davies, chief executive of banking at Revolut.

“Ireland was selected as a regional hub due to our large customer base in the country, and access to a highly educated and diverse pool of talent.”

Revolut, which offers a range of banking options, including a newly-launched easy-access savings account, said it intends to introduce new credit offerings shortly. These will be introduced in Lithuania initially with no timelines at present for their introduction in other markets.

The company, which obtained a full banking licence from the Bank of Lithuania in 2019, has a market valuation of $5 billion, according to PitchBook.