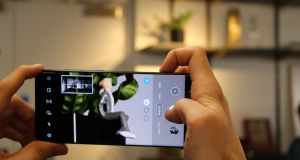 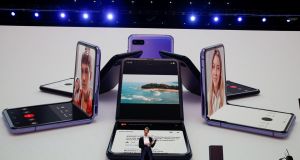 Samsung has unveiled its new range of smartphones, adding three new phones to its line-up, and revealing a new foldable phone, the Galaxy Z Flip.

The Z Flip is the second foldable device Samsung has introduced, following the announcement of the Galaxy Fold last year.

However, the launch of the Fold was delayed after issues with the screen were reported by initial reviewers. But the Flip’s screen is a 6.7-inch full HD+ dynamic Amoled Infinity Flex display, making it the first foldable glass display for Samsung.

The Z Flip comes with a 64-bit octa-core processor, 8GB of RAM, and 256GB of storage, and has a 6.7-inch Oled screen. It is due to launch later this month.

Although the Z Flip caused a stir, much of the focus of the event was on the new flagship S20 range.

Describing it as a “smartphone experience that changes the way that you capture your life”, Samsung unveiled the trio of new phones, which will ship with 5G built in. There are three options – the S20, the S20+ and the S20 Ultra. Prices start from €1,029 for the 5G version of the S20.

The world’s largest smartphone manufacturer unveiled the devices at an event in San Francisco on Tuesday, hoping that fast screens, an overhauled camera system and a spread of sizes will be enough to lift sales and beat rivals Apple and Huawei.

But customers hoping to buy the top-of-the-range S20 Ultra will need deep pockets, with the phone starting from €1,379. The 6.9-inch phone has a camera with a 100x “space zoom” that combines optical and digital zoom, the ability to shoot 8K video, and starts with 128GB in storage.

The front-facing camera on the S20 and S20+ comes in at 10 megapixels, with the S20 Ultra bumping it up to 40 megapixels. The top-end phone also includes a 5,000 mAh battery.

The company began to take preorders for the Galaxy S20, Galaxy S20+ and Galaxy S20 Ultra from Tuesday.

As an added incentive, those who preorder the Galaxy S20+ and Galaxy S20 Ultra will get the updated version of Samsung’s wireless ear buds, the Galaxy Buds+, included free of charge. – Additional reporting: Guardian

1 Bank leaked my loan request to family who tried to rip me off
2 Eason acquires rival Dubray Books for undisclosed sum
3 Solar panels: Are they worth the investment?
4 Accumulated profits at David McWilliams’ media company hits €675,000
5 Siblings who became ill next to wind farm settle case
Real news has value SUBSCRIBE