Payments company is valued at $35.3bn, having raised $1.3bn across seven rounds 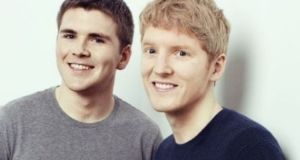 Stripe founders John Collison and and Patrick Collison. Stripe, which was founded in 2010, is valued at $35.3 billion, having raised $1.3 billion across seven funding rounds

Stripe, the online payments company founded by Limerick brothers Patrick and John Collison, is “ripe for an initial public offering (IPO),” according to Manhattan Venture Research in New York.

While the fast-growing company has repeatedly said it has no plans to seek a market listing, Santosh Rao, head of research at Manhattan, notes that the fintech space “has been buzzing with activity”, with consolidation the name of the game.

In Manhattan’s recent Venture Bytes monthly report, Mr Rao highlights a number of fintech-focused “megadeals” that have taken place over the past 12 months. These include Fis’s $43 billion (€39 billion) deal for Worldpay, Fiserv’s £22 billion (€26 billion) acquisition of First Data, and Global Payments $21.5 billion purchase of TSYS.

In addition, he notes there also been numerous smaller deals, including PayPal’s $4 billion deal for Honey Science Corporation, and Visa’s $5.3 billion acquisition of Plaid.

Mr Rao suggests that the rapid acceleration of the digital economy is driving fundamental changes in global commerce. This, he says, is good news for market leaders Stripe, PayPal, Square and Ayden, who between them dominate the lucrative payments sector with 54 per cent of the $1.3 trillion market.

The company handles billions of dollars in transactions each year and counts the likes of Amazon, Uber, Booking. com, Deliveroo and Google among its customers.

Mr Rao speculated that Stripe was ideally placed to take advantage of a market listing. “Even if it decides to hold off on the IPO, we expect the company to be an active participant in the ongoing M&A [mergers and acquisitions] activity in the payments space,” he said.

To date, Stripe has made a small number of acquisitions, the latest being a deal for Irish start-up Touchtech Payments, which that provides advanced strong customer authentication (SCA) technology for financial institutions.

The deal for Touchtech, which was announced last April, was the fifth acquisition to be made by Stripe in recent years. Others include Index, a payments company that previously secured financial backing from former Google chief executive Eric Schmidt, Indie Hackers, Tonic and Kickoff.

The company has also invested in number of other companies including fintechs Monzo and Paystack. “With a compelling market opportunity, a simple and scalable product designed for internet businesses, a deep roster of marquee customers in a business where APIs [application programming interfaces] are deeply integrated into the existing payments infrastructure, switching out is cumbersome, and an untapped international growth opportunity, Stripe is in a strong competitive position,” Mr Rao said.

“More importantly, Stripe is a bet on small and medium-sized businesses choosing pure-play online payment infrastructure providers over diversified players such as PayPal,” he added.

Manhattan Venture Research is a merchant bank focused on the secondary market for late-stage venture-backed technology companies. It was co-founded by Jared Carmel, whose previous investments include Facebook, Twitter, Alibaba, Rent the Runway, Lyft and Pinterest.

1 Irish elearning company LearnUpon closes €47.4 million investment
2 Aldi to impose limits as Christmas toys go on sale
3 Business owners: How will your business cope with Level 5?
4 Ryanair and Eir the worst for customer service during Covid crisis
5 What to consider if older person or loved one needs care at home
Real news has value SUBSCRIBE