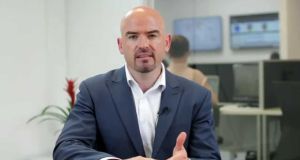 Cork-based data security company Getvisibility has secured €1.25 million in a fundraising round led by Sure Valley Ventures.

Getvisibility was founded in 2018 by Ronan Murphy as a spin-out from his long-established cybersecurity company Smarttech247.

Getvisibility, which employs 17 people, has already secured a number of big-name clients, including Laya Healthcare, the Department of Agriculture and FBD Insurance.

“What we have developed is an enterprise-grade machine-learning platform that can look at millions of documents, both legacy ones and documents that are being created in real time, and using context, determine what information is contained in it and whether it should be locked down because it contains intellectual property or sensitive information,” said Mr Murphy.

Mr Murphy said the idea for Getvisibility came as a result of working on large-scale data security projects with Smarttech.

“Companies began asking us to help them understand where their data was being stored as they didn’t know where it was and who had access to it. We looked for solutions on their behalf but quickly realised that there weren’t any, so we came up with our own,” he said.

He said the capital raised will be used to accelerate expansion into other markets, particularly in the Middle East.

“We’ve made Getvisibility available in Arabic as a lot of the AI stuff is coming out of Israel and for obvious geopolitical reasons companies in the Middle East don’t want to use it,” Mr Murphy.

This marks the first time that Mr Murphy has sought outside investment. Smarttech247, which the entrepreneur founded in 2008, remains privately funded. The company employs about 115 employees and has service revenues of €6.5 million.

Sure Valley Ventures, which was founded by Irish entrepreneur Barry Downes, led the fundraise, investing €750,000. Other backers include AIM-listed Pires Investments, which invested €250,000. Pires has a 13 per cent interest in Sure Valley.

Following the fundraise, Sure Valley partner Brian Kinane is to join Getvisibility’s board along with software industry veteran Ferras Zalt, founder of IT consultancy business Softtech. Mr Kinane has held senior positions at global telecom companies such as Ericsson and Telenor. As an alternative investment manager, he has funded over 100 companies.

“Getvisibility’s software leverages AI to discover, classify and protect critical data. The company has a world-class team and technology and, given its total addressable market is $4 billion today, Getvisibility’s opportunity is vast,” said Mr Downes, managing partner at Sure Valley Ventures.

Other Irish tech companies the VC has backed in recent years include Ambisense, Wia, Nova Leah, War Ducks, VR Education and Artomatix, which was recently acquired in a $60 million deal by Unity Technologies.

Prior to establishing Sure Valley Venture, Mr Downes was founder of Feedhenry, a Waterford-headquartered mobile software developer that was sold to US multinational company Redhat for more than €60 million, in 2014.