From tweets to fleets: Twitter trials posts with 24-hour lifespan 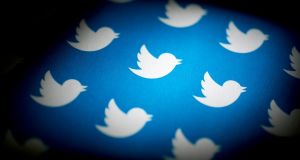 These “fleets” are designed to encourage people to share more often on its service. But the service is currently only available to a limited number of users, and is not yet part of Twitter’s main service.

“Some of you tell us that you’re uncomfortable to tweet because tweets are public, feel permanent and have public counts,” Twitter wrote in a blog post.

“We hope that people who don’t usually feel comfortable tweeting use fleets to share musings about what’s on their mind.”

Similar to tweets, fleets are text-first but videos, gifs and photos can be added. The feature is being tested in Brazil, and there is no indication that it will be made available to Twitter’s wider user base, including Irish users.

Twitter has seen a number of cases where old posts have been resurrected, causing embarrassment to public figures and celebrities.

Last month, newly elected Sinn Féin TD Réada Cronin apologised for a series of controversial tweets that included numerous remarks that were critical of Israel, and also of the fluoridation of drinking water in Ireland. The tweets were posted over a number of years.

In 2018 director James Gunn was fired from Disney’s Guardians of the Galaxy Vol 3 film after offensive Twitter posts from 2009 and 2010 were publicised; the studio later rehired the director. And in 2019, Kevin Hart stepped down as host of the Oscars after past tweets and homophobic jokes came back to haunt him. He later apologised for the posts.

Twitter has also developed a reputation for moving slowly when it comes to launching new products and features. It’s common for some ideas to percolate internally for years before they ever appear to Twitter users, a much slower pace than other social media companies.

Even expanding the length of tweets from 140 to 280 characters took years of debate and discussion inside the company.

The fleets test provides at least the perception that Twitter is moving forward. Disappearing posts have become a popular way to share on competing social sites, including Facebook’s Instagram and on Snapchat.

More than 500 million people use Instagram’s version of Stories, and Facebook executives have pointed to this as an important growth opportunity for the company’s advertising business. Instagram’s Stories feature already makes up about 10 per cent of all ad spending on Facebook properties.

It’s too soon to say whether fleets will provide a similar opportunity for Twitter. The company has started testing features in public in recent years, often asking for user feedback before rolling something out more broadly.

It’s one of the ways Twitter tries to be more thoughtful about what it launches, but also slows down the process. Instagram, by comparison, unveiled its version of Stories to all global users at the same time in 2016. – Additional reporting: Bloomberg