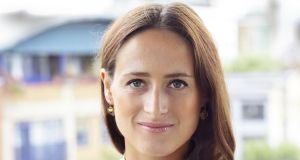 We Got Pop founder Kate McLaughlin: ‘I’m super-excited because we’re still following our same vision but now have a partner that has a lot of influence in the industry.’

We Got Pop, an Irish-founded company that has developed a software platform for the entertainment industry, has been acquired by a leading LA-based firm in a multimillion dollar deal.

Entertainment Partners, owner of the legendary Central Casting company, has bought We Got Pop for an undisclosed sum. While no figures have been revealed, informed sources described the deal value as “significant”.

We Got Pop has developed a comprehensive software solution that has changed the way people working in production are hired, managed and paid.

Founded by Dubliner Kate McLaughlin in London six years ago, the company’s platform was used to find cast and crew for over 60 per cent of UK productions in 2019, including popular shows such as Killing Eve and The Crown. It has also recently been used for a number of major film productions including 1917, Judy, and Star Wars: The Rise of Skywalker.

Prior to the acquisition, We Got Pop had raised about £4 million (€4.6 million) in funding from backers that include Octopus Ventures and Pinewood Studios.

The idea for the solution was born from Ms McLaughlin’s on-set experience, firstly as an assistant director and then as an extras casting director working on films such as World War Z, The Best Exotic Marigold Hotel and the James Bond films Spectre and Skyfall.

“In my time working in production I saw first-hand the pain in using manual, inefficient processes and the disconnect between the studio or production company requirements and what has needed to be done on set on the day. In addition, for freelancers, it was practically impossible for them to proactively go after jobs, they had to sit around and wait for calls,” she said.

“I realised that technology could resolve many of the pain points and play a meaningful role in digitising workflow and connecting the studios and freelancers in a better way and that was where the idea for We Got Pop came from,” Ms Laughlin added.

The entrepreneur told The Irish Times that We Got Pop’s technology would be used by Central Casting, the LA agency from which the phrase “straight out of central casting originated”. Its parent, Entertainment Partners, which is best known for its payroll solutions for production companies, is also using the acquisition to expand its footprint in the UK and Europe.

“I’m super-excited because we’re still following our same vision but now have a partner that has a lot of influence in the industry and we believe that with their help and experience we can achieve our goals more quickly,” said Ms Laughlin.

1 Should I switch bank now with Ulster Bank at risk of closing?
2 Air travel never going ‘back to way it was’
3 Household wealth jumps by 74% since last recession – report
4 Will brother’s widow get half of our parents’ estate when they die?
5 Tourism and aviation players demand von der Leyen end EU travel chaos
Real news has value SUBSCRIBE