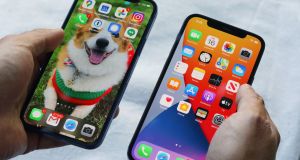 Apple is stepping up efforts to develop its own search technology as US antitrust authorities threaten multibillion-dollar payments that Google makes to secure prime placement of its engine on the iPhone.

In a little-noticed change to the latest version of the iPhone operating system, iOS 14, Apple has begun to show its own search results and link directly to websites when users type queries from its home screen.

That web search capability marks an important advance in Apple’s in-house development and could form the foundation of a fuller attack on Google, according to several people in the industry.

The Silicon Valley company is notoriously secretive about its internal projects, but the move adds to growing evidence that it is working to build a rival to Google’s search engine.

Two and a half years ago, Apple poached Google’s head of search, John Giannandrea. The hire was ostensibly to boost its artificial intelligence capabilities and its Siri virtual assistant, but also brought eight years of experience running the world’s most popular search engine.

The company’s growing in-house search capability gives it an alternative if regulators block its lucrative partnership with Google. When the US Department of Justice launched a case last week, over payments that Google makes to Apple to be the iPhone’s default search tool, urgency was added to the initiative.

“They [Apple] have a credible team that I think has the experience and the depth, if they wanted to, to build a more general search engine,” said Bill Coughran, Google’s former engineering chief, who is now a partner at Silicon Valley investor Sequoia Capital.

Apple’s frequent job advertisements for search engineers are not short on ambition, inviting candidates to “define and implement the architecture of Apple’s groundbreaking search technology”.

Search marketing experts also point to increased activity from Applebot, the iPhone maker’s once-obscure web crawler, which is used to build the vast database of online material that forms the foundation of any search engine.

Suganthan Mohanadasan, a digital marketing consultant, said Applebot has shown up “a ridiculous number of times” on his clients’ websites in recent weeks. “When the crawl rate increases, that tells us they are trying to gather more information.”

Most significantly, iOS 14 nudged aside Google for certain search functions. Queries made in the search window accessed by swiping right from the iPhone’s home screen – which Apple calls the “Today View” – show an Apple-generated list of search suggestions rather than Google results. These results include “autocomplete”-style suggestions generated by Apple, showing that it is learning from its 1 billion users’ most common queries. Apple declined to comment.

Building a true rival to Google’s search engine could take years. But with profits this year predicted to exceed $55 billion and $81 billion of net cash reserves at the last count, Apple can afford to make long-term investments.

Apple has historically tried to own and control the most important components of its products, from the custom chips that power everything from the iPhone to its AirPods and Watch accessories, to the tight integration between its software and hardware.

Yet Apple has stuck with Google as the iPhone’s default search engine for more than a decade.

Now, however, Apple has a growing incentive to change that, as regulators force it to choose between defending its relationship with Google or turning against its longstanding partner in search.

The US department of justice has put Google’s estimated $8 billion-$12 billion annual payments to be the iPhone’s default search engine at the centre of its antitrust case against the internet group.

Sharis Pozen, co-head of the global antitrust practice at law firm Clifford Chance and a former acting assistant attorney-general at the department, said the case “opens up another front for Apple” alongside legal fights with Epic Games and others over its role as App Store gatekeeper.

“Apple will be central here,” she said, adding that it must “walk a fine line” in explaining why it took billions of dollars from Google.

The department could demand an end to the exclusive agreement, she said, allowing others equal access to the iPhone’s search defaults.

Apple has stumbled in creating a rival to Google before. When Apple Maps first launched in 2012, it was so prone to errors that Scott Forstall, one of the company’s top lieutenants to late co-founder Steve Jobs, was forced to resign.

But Apple is one of the few companies that have the resources to index the web from scratch. Most of Google’s smaller rivals license their index from Microsoft’s Bing, including DuckDuckGo, a privacy-focused company that Apple already offers as an alternative to Google in its Safari browser, and Neeva, a Silicon Valley start-up founded by two former Google executives.

“Apple’s position is very unique because it has the iPhone and iOS. It controls the default browser,” said Sridhar Ramaswamy, Neeva’s co-founder and Google’s former head of advertising. Expanding in search “feels natural” for Apple, he said, as it has the ability to gather data and learn from user behaviour at large scale.

More than 20 years after Google was founded, building a search engine today is “still technically very difficult but it’s not as hard as it used to be”, said Mr Coughran, who was among the investors to put $35 million into Neeva. That is in part thanks to the cheaper cloud computing infrastructure and open-source tools that are available to both Apple and start-ups such as Neeva.

Still, the sheer scale of the problem is daunting.

“Any reasonable search engine has to have 20 billion–50 billion pages in its active index,” Mr Ramaswamy said. When a user runs a query, the retrieval system must sift through vast troves of data then rank them in milliseconds.

Some observers still dismiss the idea of Apple creating a complete search rival to Google.

Dan Wang, associate professor of business at Columbia Business School, said it would be “extremely difficult” for Apple ever to catch up.

“Google’s advantage comes from scale,” he said, as the endless user feedback helps to tune results and identify areas of improvement.

“Google gets hundreds of millions of queries every minute from users all over the world – that’s an enormous advantage when it comes to data.” – Copyright The Financial Times Limited 2020