LetsGetChecked and Chargify to create new jobs in Dublin 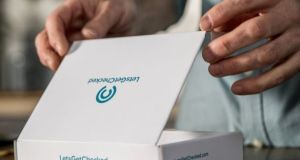 LetsGetChecked is adding another 50 roles in Dublin

At-home testing company LetsGetChecked is to create 50 new jobs in Dublin, while Chargify, a US tech company led by Irishman Paul Lynch, is adding at least 30 jobs locally.

LetsGetChecked, which announced 120 roles for Dublin and New York a year ago, is creating the new jobs in response for heavy demand for its health tests.

Founded in 2015 by Peter Foley, the company has provided more than 745,300 home tests during the past five years, with over 25,000 infections and diseases detected.

It began with sexual health tests, but its current list of tests includes men and women’s health and diagnostics for vitamin levels, thyroid function and cortisol levels.

The company was recently chosen by American Airlines for a new pre-flight Covid-19 testing programme aimed at kickstarting international travel.

It started selling its Covid-19 test directly to consumers in the US in May after receiving “emergency use” approval from the Food and Drug Administration (FDA).

LetsGetChecked raised $71 million (€60.5m) in a funding round in May to support its move into Covid testing.

Separately, Chargify, a San Antonio-headquartered company that has developed a popular billing and subscription management solution, is to create 30 jobs over the next two years. Roles include engineering, product, business development and customer success.

The company plans to have at least a third of the new roles filled by the end of 2020, with Mr Lynch, its chief executive, indicating many more jobs may be on the cards given the high level of growth it is seeing.

Chargify this week officially opens its new European, Middle East and Africa (EMEA) headquarters in Dublin. The company, which managed over $2.9 billion of billing for customers in 2019, had a record second quarter, with much of the growth coming from outside of North America.

Mr Lynch took over as chief executive of Chargify last year. He previously worked at Dublin-based Hosting 365, whose founder Ed Byrne, is general partner at investment firm Scaleworks, which bought the Texan company three years ago.

“I’m a proud Dubliner but I’ve never let my patriotic fervour stand in the way of solid business decisions. As a fast-growing business focused on expanding in EMEA there was never any other choice that worked as well for us as Dublin for a base,” he said.

1 ‘I don’t need to do any of this. . .I don’t actually need to work.’
2 Basic income for all: Has the Covid crisis given us a new economic model?
3 Only way is up for Stripe as valuation skyrockets
4 Promontoria barred from pursuing doctor over Ulster Bank loan
5 Brexit stumbling blocks persist as Barnier travels to London
Real news has value SUBSCRIBE