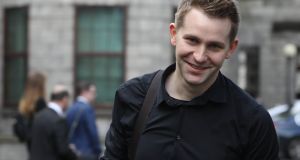 Austrian lawyer Max Schrems alleges his data privacy rights as an EU citizen were breached by transfer of his personal data by Facebook Ireland to its US parent, Facebook Inc. Photograph: Collins Courts

Facebook “secretly” sent the US government a draft report prepared for it by a US law expert for use in the case being brought by the Irish Data Protection Commissioner concerning the validity of EU-US data transfers, the High Court has been told. Brian Murray SC, for the commissioner, told Prof Stephen Vladek a letter received by the commissioner last Monday from Facebook’s lawyers “strongly suggests your report was secretly sent in draft form to the US government for comment”.

Prof Vladek, an expert witness asked by Facebook to prepare a report for its opposition to the commissioner’s case, said he only became aware last Friday of that.

During last week’s hearing, the court heard a draft report of another expert for Facebook, Prof Peter Swire, was also provided by Facebook to the US government. On Tuesday, Prof Vladek said he was “surprised” when someone on his team mentioned last Friday his own report had also been sent to the US government for comment”.

While he had received a response from Facebook’s lawyers to his draft report raising some 12 points, nothing in the solicitors’ response went to his conclusions, he said.

Niamh Hyland SC, for Facebook, intervened to say there was a detailed response from her side’s lawyers concerning this matter which should be outlined if Mr Murray intended to pursue it further.

Prof Vladek, of the University of Texas, was being examined about his report in the continuing action by commissioner Helen Dixon aimed at having the Irish court ask the Court of Justice of the EU (CJEU) decide the validity or otherwise of European Commission decisions approving EU-US data transfers via channels known as standard contractual clauses (SCCs).

What is the Max Schrems case?

It is the latest in a line of cases involving challenges on privacy grounds to the various methods by which companies transfer the personal data of EU citizens to countries outside the European Economic Area (EEA), mainly the US.

Her case, being heard by Ms Justice Caroline Costello, arises from a complaint by Austrian lawyer Max Schrems alleging his data privacy rights as an EU citizen were breached by transfer of his personal data by Facebook Ireland to its US parent, Facebook Inc.

The commissioner has made a draft finding Mr Schrems has “well-founded” objections to the SCCs for reasons including concerns about the adequacy of remedies available in the US for breach of data privacy rights of EU citizens. Her case is against Facebook and Mr Schrems who, for different reasons, oppose referral to the CJEU.

On Tuesday, Prof Vladek said that when lawyers for Facebook asked him to participate in this case as an expert witness, he was initially “a bit sceptical” as he has been critical of the oversight and accountability regimes in US law concerning surveillance.

When he read the commissioner’s draft decision, he considered it involved an “oddly apportioned assessment” of obstacles and remedies for EU citizens alleging data privacy breaches and realised he could be useful in establishing an “accurate” picture of the remedial regime.

He was asked to report on three issues: the scope of remedies for surveillance violations; US standing (entitlement to sue) doctrine and; the DPC draft decision and any incompleteness in that.

He told Mr Murray he had compiled his report without assistance. Facebook’s lawyers later identified 12 points in his draft they wished him to expand on or clarify and he also received other expert reports after he had filed his own report.

Particularly since the disclosures by Edward Snowden, there has been progress in some areas, including more judicial supervision, constraints on data collection and a greater “pushback” by internet service providers against US intelligence agency requests, he said.

He agreed he had in other publications criticised a range of obstacles and flaws in remedies available for persons who allege they were subject to surveillance. He also agreed the US Privacy and Civil Liberties Oversight Board remains inquorate with no indication when president Donald Trump might appoint sufficient members to it.