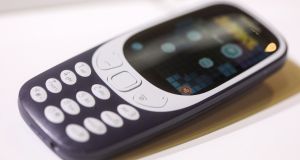 The Nokia 3310 has battery life of almost a month in standby mode. Photograph: Chris Ratcliffe/Bloomberg

You might have noticed that consumers these days lean towards the nostalgic, looking back with rose-tinted glasses at the way things used to be. You know, a simpler time, when music was sold on vinyl instead of a series of ones and zeros in a digital file; and when you drove cars instead of having them drive you.

And, it seems, a time when your mobile phone was indestructible and lasted for several days on a single charge, instead of sending you scrambling for the nearest power outlet every 12 hours or so. A simpler time when you could disconnect from your work email at 5pm and social networks hadn’t taken hold of your life.

With that in mind, we are welcoming back the Nokia 3310, one of the brand’s most reliable phones. It has been mooted as a festival phone, one that won’t break or die a tragic death when you drop it at your festival of choice this summer. Perhaps you might need it as an “emergency” phone, when your smartphone battery lets you down.

It has a removable battery. It has a long battery life – almost a month in standby. It even has a camera.

The complaint about smartphone battery life is justified. But the reason smartphones have such poor battery life is because we demand so many functions from them. Always on internet? Push notifications for your email? Social networking apps running in the background? Large colour touch-sensitive screen? It all drains power.

It’s not surprising that the new 3310 will last for 30 days on standby if it doesn’t really do much.

There is a possibility that the Nokia 3310 will be the phone world’s equivalent of the Mini car. There are plenty of people who insist the original Mini is the best car ever made, and all we ever needed in an automobile. That’s despite the fact that huge leaps have been made in in-car technology and safety in the intervening period that have made our lives more comfortable. Not to mention the extra seats in modern cars that let families travel together in safety and not crammed in like sardines. Still, some people cling on to the classics.

Yet when it comes to the Nokia the reality is these simple phones have never really gone away. They’ve just been sidelined, dubbed “feature phones” and targeted at a completely different market. And the reason why these phones were sidelined – indeed, part of the reason why Nokia fell out of favour with consumers – is because they wanted smartphones that could do everything from replace your car’s sat-nav to record your family occasions in high definition. These phones don’t do that.

Perhaps it says more about the state of the smartphone market than it does about the genuine appeal of a phone that does little more than make calls and send texts. Are smartphones really that dull that a reboot of a 17-year-old phone seems such a good idea?