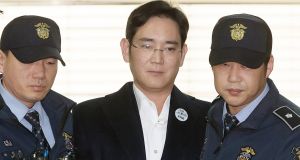 Mr Lee will stand trial over accusations he participated in bribes made in exchange for government favours, with formal charges filed Tuesday against him and four other executives.

Mr Lee is accused of pledging 43 billion won (€35.9 million) in bribes to a company and foundations controlled by Choi. He denies wrongdoing.

The 105-member special prosecutor team has indicted 30 individuals so far as part of a probe into far-reaching allegations of corruption in the highest echelons of business and government in Korea. “Samsung was directly linked to the influence-peddling scandal and was essential to the special prosecutor’s investigation,” said Lee Kyu-chul, a spokesman for the special prosecutor. “The indictment describes in detail the private conversation between Jay Y Lee and President Park Geun-hye,” he said, without providing copies of the indictment.

The other executives to be charged are Samsung Group vice-chairman Choi Gee-sung, president Chang Choong-ki and Samsung Electronics president Park Sang-jin and executive vice-president Hwang Sung-soo, the spokesman said. A Samsung Group spokeswoman declined to comment on the charges.

The Samsung Group on Tuesday said it has dismantled its corporate strategy office, the nerve centre of operations for the sprawling conglomerate.

The move follows its chief’s arrest amid a graft scandal that could bring down South Korea’s president, Park Geun-hye.

Samsung, in a statement, said top group executives including vice-chairman Choi Gee-sung and president Chang Choong-ki had resigned and that its affiliates would manage themselves independently through cooperation between individual firms’ chief executives and the boards of directors.

Mr Lee, third-generation leader of the Samsung Group, promised in December to dismantle the corporate strategy office amid accusations that he and the office worked to bribe President Park and her confidant, Choi Soon-sil, to curry favour and cement his control of the smartphones-to-biopharmaceuticals business empire.