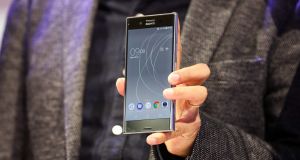 Sony has become the latest mobile manufacturer to unveil a smartphone, the Xperia XZ Premium, which was launched at the Mobile World Congress on Monday.

As the largest annual global gathering for the mobile industry got under way in Barcelona, Sony followed on the heels of rivals such as Huawei and LG in announcing the successor to the Xperia Z5 Premium, which launched in 2015.

The new smartphone, which comes with a high-end 4K HDR display on its 5.5in screen, also offers a super-slow-motion video capture.

Sony has also announced a new partnership with Amazon Prime for 4K HDR content for users.

The Xperia XZ Premium boasts a Qualcomm Snapdragon 835 processor, making it one of the first smartphones capable of “Gigabit Class LTE”, offering download speeds of up to 1 Gbps.

Xperia XZ Premium will be available in luminous chrome and deep-sea black colours from April.

The Mobile World Congress, which was established in 1987, drew nearly 101,000 visitors from 204 countries in 2016, representing more than 2,200 companies. The event’s organiser, GSMA, is expecting a record attendance at this year’s event.

The gathering is usually a launch platform for the year’s hottest smartphones, tablets and other connected devices. Yesterday, Huawei, LG and Blackberry were among the mobile manufacturers showing off their latest products.

Nokia also made a welcome return with a new 3310, a much-loved device that was the world’s most popular phone back in 2000. The new model, which is being sold under licence by the Finnish start-up HMD Global, has bigger screens and 22 hours’ talk time and is priced at just €49.

Seeking to press their advantage, with rival Samsung Electronics humbled by the Note 7 recall fiasco, LG and Huawei revealed their latest flagship devices on Sunday a day before the Mobile World Congress kicks off in Barcelona.

The annual event has in recent years been used by Samsung to showcase new releases of its Galaxy S series. But following the high-profile termination of its fire-prone Note 7 device last year at a cost of more than $5 billion, the South Korean company delayed the rollout of its latest flagship smartphone.

Samsung’s plight has been thrown into stark relief again as the smartphone maker - which in the fourth quarter was edged out of the world’s top spot by Apple for the first time in two years - faces the industry’s biggest conference without a new handset to woo customers and analysts, instead introducing two new tablets.

On Sunday, Samsung said it would launch its Galaxy S8 smartphone on March 29th, giving the likes of LG and Huawei ample time to fill the void.

On Sunday, LG launched the G6, featuring an edge-to-edge screen and wireless charging capabilities - a device that offers “new visual and manual experiences, as it marries an expanded screen with the convenience of one-handed use”, according to Juno Cho, president of LG’s mobile communications section.

Huawei introduced the P10, a device featuring a Leica camera and curved edges that the company hopes will help bolster its global presence.

Plans for fifth generation (5G) mobile broadbrand also featured at the congress. Ericsson is betting on cloud technology to capture as much as possible of the $1.2 trillion market it expects 5G services to spur, chief executive Borje Ekholm said. “5G is really starting to happen,” Ekholm said in an interview with Bloomberg TV. “What we’re starting to see is operators positioning their 4G networks and starting to evolve into 5G.”

5G services aren’t expected to be commercially available until 2020. In the meantime, Ericsson has signed development agreements with more than 30 carriers, and some, like Verizon Communications and its closest rival AT&T, are preparing for trials of the new technology. Verizon said last week it will work with equipment partners including Ericsson and Samsung Electronics to test faster 5G mobile broadband service in 11 markets in the first half of this year.

More than 30 Irish firms are attending the Mobile World Congress. This year’s event, which formally kicked off on Monday, will cover a wide range of areas, including 5G, artificial intelligence, digital commerce, disruptive technologies, drones, the internet of things, robotics, smart cities, and virtual and augmented reality.