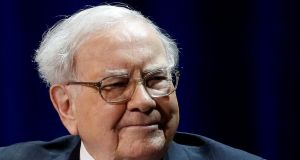 Warren Buffett: his answer as to why he purchased so many shares in Apple was “I liked it.” Photograph: Shannon Stapleton

Warren Buffett has revealed that Berkshire Hathaway’s stake in Apple is twice as large as previously disclosed at more than $18 billion (€17 billion) but said that the iPhone maker’s share price is now so high it is no longer an attractive investment.

In a television interview to mark the release of his latest annual letter to Berkshire shareholders, Mr Buffett said he had personally bought more than $8 billion of Apple shares in January.

Berkshire had $7 billion of its $122 billion equity portfolio invested in Apple at the end of 2016 after almost a year of incremental purchases, according to Mr Buffett’s letter, but the extra purchases more than doubled the stake to 133 million shares. Berkshire is now one of Apple’s top five shareholders with a stake worth $18.2 billion.

Mr Buffett told CNBC’s Becky Quick that he would not normally discuss his trading activity but he could talk about Apple “since we’re not buying it now and it’s at a price different than I would buy it now”.

He said: “We can change our mind tomorrow. We have not bought Apple since the earnings report came out because it shot up some then. One of the fellows in the office has about 10 million shares and I have, for Berkshire’s account, 123 million.”

The “fellows in the office” are Mr Buffett’s investment deputies Todd Combs and Ted Weschler, former hedge fund managers who now manage more than $10 billion apiece, one of whom was responsible for the first purchases of Apple stock last year.

In the TV interview on Monday, Mr Buffett repeated he was “still not a technology investor” and waved around his ancient flip-phone to prove it. Of Apple and its iPhone, he said: “There’s a vast untapped market out there; 86-year-old guys who haven’t got it yet.”

His straightforward answer for why he purchased so much more stock: “I liked it.”

Apple shares have risen 12.6 per cent since January 31st, when it reported fourth-quarter earnings that showed a rebound in iPhone sales around the world. The stock is up 41.3 per cent during the past 12 months.

The expansion of Mr Buffett’s investment team at Berkshire has allowed the company to diversify its portfolio of equities, even as it shrinks in importance for the business as a whole. Most of the value of Berkshire is now in its large operating businesses, which span insurance, utilities, railroads, real estate agents, manufacturing and retail, among other industries.

Even so, news of an investment by Mr Buffett continues to make stock market waves, as did his purchases of Apple and US airline stocks last year.

In his annual letter, he suggested these recent investments may not prove as long-lived in the portfolio as the very large equity investments he used to make when his company was smaller.

Some of these investments – including Coca-Cola and American Express – are still among the largest Berkshire holdings. – Copyright The Financial Times Limited 2017