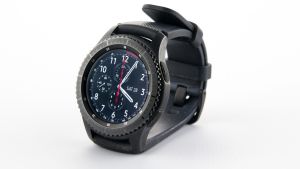 Are smartwatches a dying breed? If they are, no one appears to have told the manufacturers. As Mobile World Congress this week showed, they are still churning out the wearables in the hopes that one of the devices will appeal to consumers who have yet to jump on the bandwagon.

Samsung has been banging the smartwatch drum for a while now. From Android Wear to Tizen – its own operating system – fitness-focused watches to more classic looks, the mobile-maker is keen to find the formula for success.

The Gear S3 – the Frontier version, in this case – is the latest attempt at this. The Gear S2 had some good ideas, some of which have made a reappearance in its successor. The rotating bezel is back, the touchscreen is high quality, and there is a heart-rate monitor built in to the back. It has built-in GPS too, which makes it far more usable for those who want a watch that will work independently of the phone.

Two buttons on the right side control power/home menu and the back function. Rotating the bezel clockwise will scroll through widgets such as reminders, exercise, calories burned for the day and so on. Scrolling counterclockwise takes you back to the watch face, and then to notifications if you have connected your phone.

Speaking of phones, now that the tie between the Gear smartwatches and Samsung’s smartphones has been cut, you can use the S3 Frontier with phones running Android 4.4 and higher, and that have 1.5GB of RAM or more.

Aesthetically, the Gear S3 Frontier is not for me. We’ll just get that out of the way right now.

If you have more robust wrists, the Frontier will do just fine. But if you lean towards the slightly thinner end of things, then skip the Frontier and go straight for the S3 Classic. Chances are it’s still going to be a little on the chunky side if you prefer a more discreet watch, but that’s a bit of an ask in smartwatch territory, so the S3 fits in fine with its competition here.

The Frontier is the chunkiest version of the S3. That’s partly because of the size of the Super AMOLED display – at 1.3 inches, it’s not compact – and partly because it’s supposed to be a more rugged watch. It’s IP68 certified for dust and water resistance, and apparently has military grade durability (I didn’t try to test that too much beyond the odd dip in water, so I’ll just have to take Samsung’s word for it).

But aesthetics aside, how does the S3 frontier stack up against its peers? The Tizen operating system is Samsung’s own, which is both a good and a bad thing. Tizen in itself isn’t a bad operating system, but it means that there may not be the same number of apps available for it – particularly for smaller screens – that you might get with Android Wear, for example.

Like other smartwatches, the Gear S3 Frontier has its own dock. It connects to your power source over micro USB, and serves as a stand for the watch while it charges. A full charge can take a couple hours.

That’s another thing you have to take into account with the S3 Frontier: that bigger case makes it easier to shove a bigger battery in there. Perhaps you don’t mind the trade-off between size and battery life, but if you would rather something you don’t have to charge every night, take a good, hard look at Samsung’s watch.

If you like robust watches, the S3 Frontier is a good option. It feels chunky – not really my thing, but it appealed to a few other people that spotted it while the review was being carried out – and it’s more like an outdoor watch than a delicate piece of electronic equipment that you’ll neurotically protect from potential hazards.

We need to talk about Tizen. While the platform is fine in itself, the problem is that getting apps for Samsung’s own software may be an issue.

The S3 has automatic exercise tracking, which is welcome, but it can be a bit hit and miss at times.

If you are keen on smartwatches that look more like a regular timepiece, the Samsung Gear S3 Frontier is one to consider.

1 Why gift a son now if it eats into his tax-free inheritance threshold?
2 Can we finally say farewell to the scourge of hot-desking?
3 Big Four told to outline plans for audit split in UK by October
4 Amazon.com shares top $3,000 for the first time
5 Ballymore acquires London shopping centre for €83m
Real news has value SUBSCRIBE